Ida Barnett Wells, born into enslavement in 1862 and orphaned at 16, became a newspaper editor and part owner of a small newspaper called Free Speech and Headlight in Memphis, Tennessee. After witnessing the lynching of three close friends in 1892, Wells became a lifelong activist and speaker in the anti-lynching movement. In retaliation for her speaking out against lynching, her newspaper offices were destroyed, and her family threatened, forcing Wells to move to New York, where she worked briefly at The New York Age, the most influential African American newspaper at the time, edited by Timothy T. Fortune. Wells wrote a series of articles for The New York Age, published in June 1892 as a pamphlet, “Southern Horrors: Lynch Law in All Its Phases.” Soon after, Wells moved to Chicago and continued her work, publishing a pamphlet titled “The Reason Why the Colored American Is Not in the World's Columbian Exposition,” raising enough funds on her own to have over 20,000 copies distributed in 1893 at the Columbian Exposition. It included articles by I. Garland Penn, Frederick Douglass and Ferdinand Lee Barnett, the latter whom she married in 1895.

Writing to Tourgee from Chicago on July 1, 1893, Wells expresses her desire for Tourgee to contribute to one of her pamphlets, possibly intended for publication overseas. She asks him for:

“a chapter on reconstruction as it affected the Negro, the laws passed by southern states against intermarriage, separate car laws, the operations of the Ku-Klux Klans…to nullify the Negro’s vote is needed. You are more like than any one I know to have the statistics on the subject…The English people do not understand how state governments can thus nullify the National constitution and regarding the right to vote. It is very necessary that this be made clear and I know no one with the data and the ability and the zeal for the pamphlet, all rolled in one who could help me.”

It is also likely that Tourgee had some influence in helping Wells get a series of articles published as “Ida Wells Abroad” in the Inter Ocean in 1894. What is known is that in 1893 and again in 1894, Wells traveled overseas at the invitation of Quaker, anti-imperialist activist Catherine Impey, to lecture throughout Britain on the topic of lynching with the hope of mobilizing public support at home by reaching an international audience. 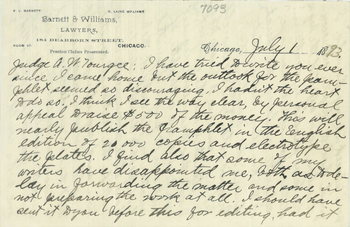