Since that time, the microfilm has been sold to over 10 different university library collections across the country (and to one commercial vendor) while the original materials remained in Westfield in relative obscurity. Every once in a while, a flurry of interest would take hold, but Tourgee’s legacy – found in both his own works and in the voices of Americans across the nation whose letters he preserved – have remained relatively unexplored until recently. In more recent years, scholars from Britain, Japan, Australia and, the U.S. have examined parts of the collection for academic research and publication.

One American scholar, Mark Elliott (now at the University of North Carolina) developed a well written autobiography of Albion Tourgee that is probably the most comprehensive and historically accurate to date (Color-Blind Justice: Albion Tourgee and the Quest for Racial Equality (2006), while another scholar, Caroline Karcher (currently at Temple University in Pennsylvania) has been recognized for her recent republication and insightful editorial work on Tourgee’s novel, Bricks Without Straw. 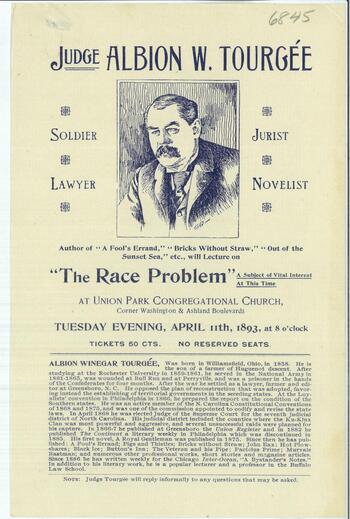