Much like his involvement with the Wide Awakes at the University of Rochester, Tourgee became actively engaged in activities and shared ideologies with an emerging group of men who identified themselves as alternately, “The Democratic League,” the “Loyal League” and ultimately as the “Union League”.

The Union League was an immensely popular organization of its day, allowing everyday people to participate in partisan politics. It was also perceived as an organized threat to Southern Democratic interests, who may have established the Ku Klux in part to counter organized activity of the League. In addition, a profusion of newspapers emerged; supported by the major parties at this time, while many others came and went with the splinter groups that started them. The exceeding use of political labels such as “Unionists” and “Secessionists” or “Loyal Men” and “Copperheads” as well as the exclusivity of the political organizations that were being organized across the country only exacerbated tensions and animosity in political and social spheres of life, even before the conclusion of the Civil War.

The political troubles were only just beginning as the economic depression in the South persisted in the aftermath of war, and seemed to grow worse daily, heightening feelings of bitterness and searching for sources to blame. 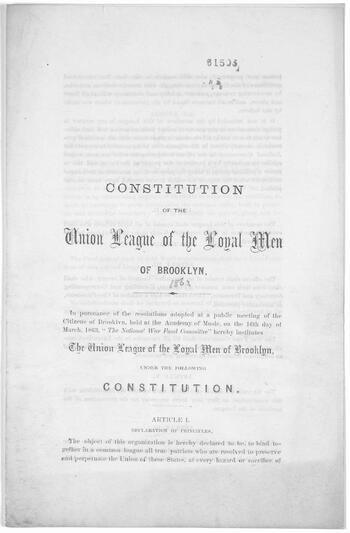 Constitution of the Union league of the loyal men of Brooklyn. [Brooklyn, 1863]. Courtesy of Library of Congress.