The former Confederate states were organized into five military districts and their existing state governments were declared to be provisional only: these states were required to call constitutional conventions, guarantee full suffrage to the freedmen, create and ratify a new state constitutions, as well as ratify the Fourteenth Amendment; then and only then would their representatives be readmitted to Congress.

Of the 120 delegates elected to the 1868 North Carolina State Constitution Convention, only thirteen were Democrats, the rest Republican. Of the Republicans, thirteen were African American and sixteen were either or both of Northern origin and former Union Army officers. In the Tourgee Papers, there is correspondence from delegates such as S. S. Ashley, Joseph C. Abbott, George W. Welker, John R. French, James H. Harris, J. W. Hood, W.H.S. Sweet and Abial W. Fisher. Despite suggestions that he and other “radicals” were elected due to the increased black electorate in North Carolina, the reported returns show that Tourgee received nearly twice as many “white” votes as “black” votes in Guildford County and, he received the second highest return of five candidates in that county, after Reverend George W. Welker. 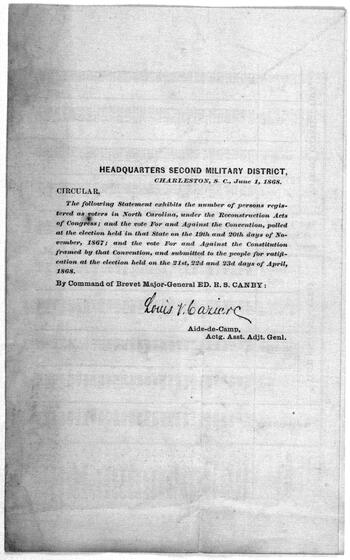 The following statement exhibits the number of persons registered as voters in North Carolina, under the reconstruction acts of Congress; and the vote for and against the convention, polled at the election held in that state on the 19th and 20th days of November, 1867;.. Courtesy of the Library of Congress.