Albion Tourgee began life in Williamsfield, Ohio. He was born in 1838, the son of Valentine and Emma Louisa (Winegar) Tourgee. The Tourgees had migrated to the part of Ohio referred to as the “Western Reserve” from their home in Massachusetts. Tourgee’s mother died in 1843 and never close to his father, Tourgee spent a brief part of his youth living with relatives in Lee, Massachusetts. Eventually, Tourgee returned to Ohio and attended Kingsville Academy (#40, #49, #60, #1991) where he excelled in his academic studies. Tourgee met Emma Kilbourne at the Academy and the two became much attached. Unable to secure the necessary funds to attend Harvard University, his first choice for college, Tourgee entered the University of Rochester in 1859 as a sophomore; the same year in which Charles Darwin’s Origin of Species was published and would later impact the topic of race relations. On campus, Tourgee became one of the organizers of a student “Wide Awake” club. The Wide Awakes were organized across the country and comprised mostly of groups of young, single men who supported Lincoln in the 1860 presidential election. Almost as much a social as political organization, the Wide Awakes supported preservation of the Union and the Republican Party. 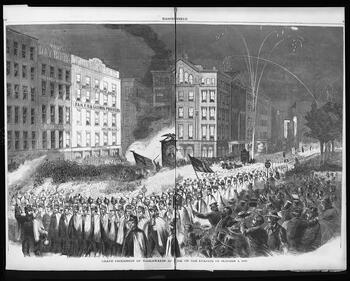