Despite the passage of the 14th and 15th Amendments, despite the Congressional hearings into the Klan activities, despite the rewriting of state constitutions in the South, despite the Republican majority, conditions for African Americans, as well as poor whites had not significantly improved. Moreover, Klan activities were on the rise, Northern responses to the atrocities were tepid, and political inaction or stalemate at any level seemed to render any possible progress towards equality hopeless. This must have been discouraging for people like Tourgee who had envisioned such a different outcome from the war so recently won at great cost. In ten years, Tourgee had witnessed so much that had accomplished so little. It must have all seemed foolish indeed, and ironically, Tourgee’s first successful novel, A Fool’s Errand, encapsulates just those thoughts.

The novel is loosely based on Tourgee himself: the protagonist is Comfort Servosse, a Northerner and former Union soldier who moves to the South for health reasons, eventually becoming embroiled in local conflicts between those wishing to preserve the old social and economic order of the South and those wanting to change it.&nbsp; A Fool’s Errand became an overnight sensation, selling over 200,000 copies. Tourgee used most of the proceeds to move his family back North in 1881, where he built&nbsp;a grand home in Mayville, New York which he called “Thorheim.” 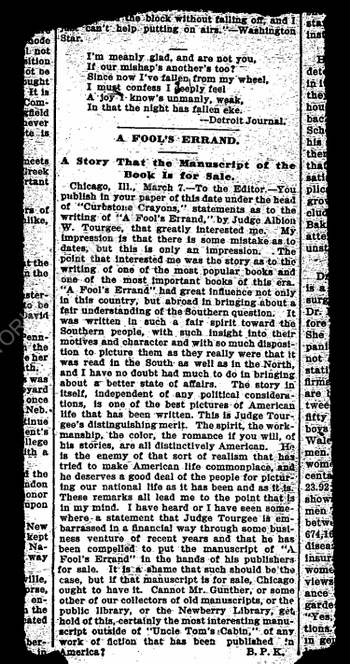