In addition to his writing novels and journal articles for publication, Tourgee had been unsuccessfully attempting to establish his own literary journal, The Continent, an illustrated weekly magazine ran from 1881-1884. The magazine represented Tourgee’s passion for both the social and artistic power of literature. For example, volume 3 of The Continent was offering cash prizes for wood engravings submitted by students at the Philadelphia School of Design for Women. In this way, Tourgee obtained unique artwork for his magazine while supporting the professional development of women in the arts. Despite literary contributions from noted authors of the day such as Harriet Beecher Stowe, Oscar Wilde, Edward P. Roe, Mary Wilkins Freeman and others, the magazine kept losing money and by 1884 ceased publication. 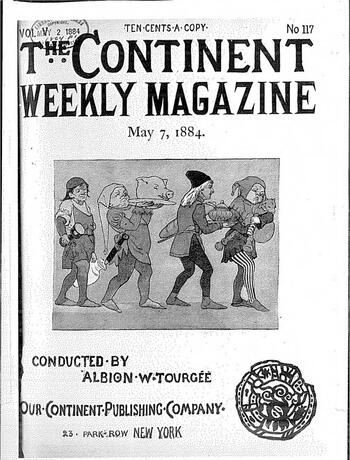