In June, 1892, Homer Adolphe Plessy, a New Orleans resident whose ancestry was one eighth of African descent, was arrested for entering and refusing to leave the “white” car of a train. His case was sent to trial in a local criminal court where Plessy was convicted of breaking the 1890 Louisiana Separate Car Act. No. 111. The district court judge presiding over the case was John Howard Ferguson, who had previously declared a similar, separate car law unconstitutional in a case that had involved rail travel crossing several states. In this case, he declared against the plaintiff, arguing that a state could choose to regulate businesses (including railroad companies) that operated within its own boundaries.  On behalf of the appellant, Tourgee and Walker presented Writs of Prohibition and Certiorari to the Supreme Court of Louisiana November 30, 1892, on the basis that the matter was outside the jurisdiction of the lower courts since it challenged a federal right of a U.S. citizen, stating “The fourteenth amendment furnishes an additional guaranty against any encroachment by the States upon the fundamental rights which belong to every citizen as a member of society.”

The State Supreme Court ruled for the lower court’s decision and so Tourgee made his appeal to the United States Supreme Court for Plaintiff in Error. In other words, the 1890 Act. No. 111, of the legislature of the State of Louisiana would be challenged as unconstitutional since the very language of the law in using “race” as a distinguishing factor for requiring people to go into certain cars, amounted to a violation of the “equal rights” of all U.S. citizens. The state law would now be challenged on the grounds it authorized train conductors to determine and enforce who belonged to which race and therefore who should sit where on a train with no avenue of appeal, should any passenger wish to contest the classification given to him or to her by the conductor. 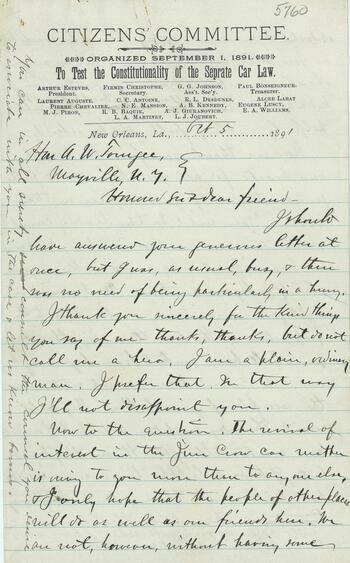 Supreme Court of Louisiana, No. 11.134, Ex Parte, Homer A. Plessy: Brief of relator for writs of prohibition and certiorari to the judge of section A, criminal district court, for the Parish of Orleans. Courtesy of Chautauqua County Historical Society.