Tourgee's longtime friend and former University of Rochester classmate, E. H. Johnson sent him a letter in May 1902, describing Johnson's review of the new book published by Thomas Dixon called The Leopard's Spots. In Johnson's opinion, the narrative seemed a direct response to Tourgee's earlier post Civil War novel, A Fool's Errand and was propagating a "Southern policy" of white supremacy in foreign relations (Puerto Rico and the Philippines) as well as at home. Tourgee refuted the analogy stating:

“There is a world-wide difference between refusing a man the right to vote and taking it away from him after it has once been conferred upon him. This has never been done in the United States except at the South.

It will no doubt shock you to have me say that education is no better quaranty of the liberty of a people who are subject to the control of another class, than Christianity…Education teaches the dominant class how to make the subjection of the class it is inclined…to oppress…”

As Tourgee now sees it, education can have no use for the African American as long as he lacks the political liberty to exercise his intelligence. “The general impulse of today is the sure measure of tomorrow’s tendencies” is how Tourgee accounts for the troubling conditions between the races and the doctrines of people like Booker T. Washington who encourage its acceptance. The impulse of “white supremacy” encourages tendencies of submitting to oppression and abandoning rights
&nbsp;

Toward the end of his letter, Tourgee writes, “If I feel so keenly why do I not raise my voice in protest?” He answers his own question by suggesting that it was not his role to be “the pivot of events” nor his inclination to do or say something that would lead to greater horrors. He refers to “John Brown’s insane effort to destroy Slavery” just as dangerous and horrible as Dixon “hurls his torch into the magazine of dynamite which underlies the social fabric of the South,” 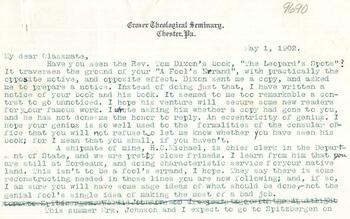