Lynching and the African American Response

In December, 1889, eight African American men were taken out of jail cells in Barnwell, South Carolina at night by a mob of white men, tied to nearby trees, shot to death, and their bodies left there. The following day, The Manning Times reported:

When asked if he did not consider the whole affair – the murders of white men by negroes and the terrible retaliation – as an additional evidence of the necessity of separating the races, the Governor replied he did “Unquestionably,” said he:

“the two races cannot live together in peace while both are aspiring to supremacy. The negroes, if left to themselves, would not create friction by ambition and jealousies against the whites. It is the outside influence which leads them to oppose the whites and keep alive race antagonism. They look to Congress to give them control of the South, and this aggravates the gravity of the race issue. I am wholly in favor of the exportation of negroes in sufficient numbers to relieve the present unhappy situation…Looking this question of race antagonism squarely in the face, it is obvious that a separation is the only solution of our troubles. We should however be kind to these people and do all for them which it is possible for a superior race to do for an inferior.”

Though urged not to retaliate with hostility for the brutal acts committed against the eight unfortunate citizens, the African American community did indeed respond by supporting efforts to establish a fund for the survivors of the men, including the widows and twenty-five children. An African American woman from Columbia, South Carolina, Helen Brayton, who would also serve on the Board of Lady Managers at the 1893 Columbian Exposition, helped set up the fund. Brayton, who had heard Tourgee speak at Lake Mohonk earlier that year and had read his recent article in the New York Tribune, wrote to him in May of 1890 to let him know of the events at Barnwell and of her intention to raise funds to be able to purchase a plot of farmland and build small homes where the widowed women could adequately raise and educate their children. In the letter, Brayton states:

“This butchery has caused a terrible hopelessness among the negroes that their wrongs will ever be righted and that they will be free men. That money is coming to me for the help of these widows, seems to be to them a sign, that they have friends somewhere beyond So. Ca…I lived in Aiken at the time of the Hamburg Massacre, those poor women saw their husbands riddled with bullets, fled terror stricken seventeen miles, and fell at our door begging for shelter and protection, and in the early morning four little children were born, and yet no one feels touched by their sorrows, and conscience is soothed by the belief they are inferior and not capable of the fine instincts of the white race…” 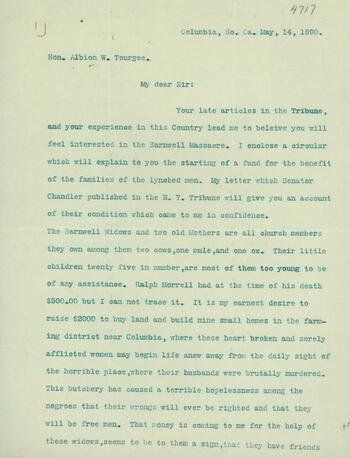