Tourgee’s literary efforts continued to generate public discussion and influence education. In a letter, dated February 1889, W. C. McClelland (possibly by W. C. McClelland, a professor of English Language and Literature, and faculty for one of the literary societies at Washington and Jefferson College in Pennsylvania), writing from Washington, Pennsylvania, McClelland says:

I have just finished the third of The Letters to a King. In my judgment they hit the mark right in the middle…you are a spiritual maverick. I’m going to be careful to put these in the hands of our students…”

And, on March 2, 1891, Moses Coit Tyler, Professor of History at Cornell University (and named first ever Professor of American History at a U.S. college or university) wrote to Tourgee to let him know that the Library was acquiring anti-slavery publications as well as publications and other documents relating to reconstruction in the South and of the “post-bellum attempts at settling the negro question..”

Tyler wanted copies of Tourgee’s works for what would become known as the Samuel J. May Anti-Slavery Collection at Cornell University. 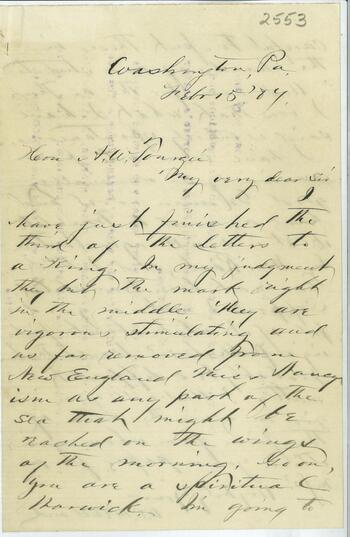