A Change in Plans

Tourgee did finally relocate with his wife to Greensboro, North Carolina, where he purchased a large tract of land and attempted to start a nursery business in partnership with two other men. He is said to have employed mostly workers of African descent. The postwar South was soon populated with towns like Greensboro, in which concentrations of freedmen and white Northerners came to settle and work the land. Entirely new communities were created by this movement of people.

After only a short period, Tourgee began to realize that his business venture was failing, while in contrast his political and literary activities were consuming more of his time and garnering much attention. Tourgee eventually decided to sell off most of the land he had acquired in Greensboro, and concentrate on his political activism. Some of the land was donated to help create Bennett College. 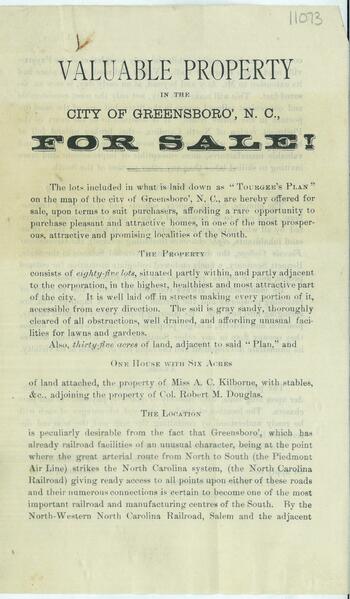