Unfortunately, as history reflects, the Supreme Court ruled in favor of upholding Ferguson’s decision by an 8 to 1 vote, with only Justice Harlan dissenting. For Tourgee, this was a devastating blow to the civil rights cause he had fought so long and hard to win. If the highest court in the land ruled that “separate” could mean “equal” then, in Tourgee’s mind, there was little recourse in the political system to alter racial relations. Although the case was lost, Tourgee had managed to help in getting the issue of race prejudice and its consequences all the way up to the highest court in the land for public discussion. His arguments on the arbitrary and unscientific definitions of “race” and “color” as well as the tacit implications of racial superiority rather than equality as the basis for segregation also managed to procure a dissent that would nearly sixty years later, become part of the argument for overturning Plessy v Ferguson in the 1954 Brown v Board of Education decision; that “separate” could not exist in a state where all citizens were to be regarded as “equal.” In fact, as we have seen today in cases involving same sex marriage, the argument that where the intent of the law is to humiliate and shame those affected by its implementation is unjust and unequal.

With the recent failure of the National Citizens Rights Association, and the Plessy v Ferguson decision institutionalizing segregation, Tourgee found one ray of hope in an otherwise bleak social and political landscape of citizens’ rights; that of anti-lynching legislation. Anti-lynching efforts had not been so successful in the national arena, but now it was gaining momentum in the State of Ohio. After two successive lynchings in different counties in Ohio in 1894, Tourgee became involved in efforts to secure legislation that would make an entire municipal jurisdiction liable for damages to parties of lynching victims. 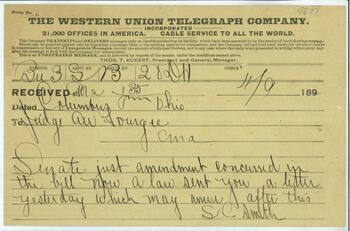