When Tourgee came back home to Ohio, he and Emma were immediately married, but once again, Tourgee left for the war. From the time of his marriage, until just a month before his final resignation from the Army in December 1863, Tourgee kept a personal diary, offering glimpses into Union Army life and the impression it made on young Tourgee. During his final enlistment, Tourgee wrote a poem called “The Wounded Soldier to His Bride” in late summer 1863. The poem describes a young man who is recently married but finds himself compelled to join the Army despite the protests of his wife. In the end, this soldier, unlike Tourgee, dies on the battlefield, pressing a picture of his wife to his lifeless body.

Emma and Albion Tourgee created a large volume of correspondence between each other over the forty two years of their marriage, precipitated to some extent by Tourgee’s absences from home due to his legal and literary travels during those years. 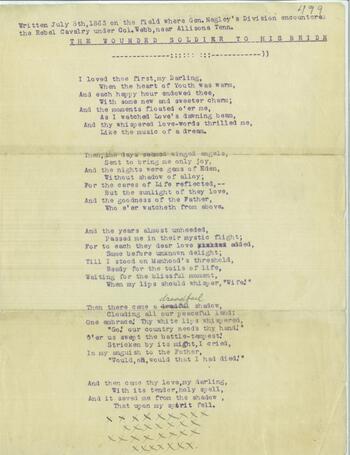 Poem, "The Wounded Soldier to His Bride" (presumed to be written by Albion Winegar Tourgée to Emma K. Tourgée), 1863-07-05. Courtesy of Chautauqua County Historical Society.