Tourgee’s entire experience in the Union Army became the basis for one of his later novels, The Story of a Thousand. Throughout his life, Tourgee would make references to the war and its brutal toll on human life in his literary and political prose, identifying the war as the milestone that forever changed the American landscape. For Tourgee, the Civil War had been the ultimate sacrifice of lives to demonstrate the lengths to which people had gone, not to preserve, but to effect social and political change. In a later letter to Reverend A. Lyman, undated … Tourgee writes: Dear Friend: I do not think we are very far apart. The only difference is this: Regeneration is a miracle. Citizenship is merely the doing of justice to others…It needs no miracle to be a good citizen…I believe that the golden rule is a rule of the highest policy – not merely the exhortation given to a cult…What I wish people to learn is that it is a man’s duty to be a good citizen whether converted or not…the duty of man is to improve the condition of his fellow…I do not want church=rule or church=citizenship but citizenship based on the golden rule no matter who the man may be that exercises it. 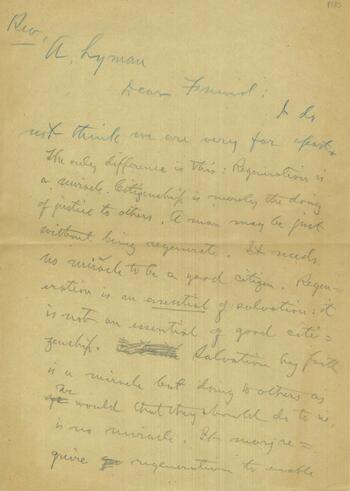