The View from Abroad

Although he had been a somewhat reluctant early supporter of anti-lynching legislation, the fact that William McKinley signed the bill into law in Ohio gave him the added lustre of leadership that helped propel him to the White House in 1896. Tourgee, presumably still very disappointed over the recent Supreme Court decision in Plessy v Ferguson, gave his support to McKinley, primarily through publication of his War of the Standards, a Republican campaign pamphlet. At this point, Tourgee and his family were actively pursuing a consul position, preferably one in England, in exchange for his efforts on behalf of the Republican Party. Tourgee’s appointment was not for England, but for a post in Bordeaux, France, where he was to remain until his death in May, 1905. But even from abroad, Tourgee’s influence in American life could be felt. He contributed a few more pieces to the Inter Ocean and the National Tribune and published The Man Who Outlived Himself (1898). He even had something to say about his occupation, writing “Our Consular System” for The Independent, a weekly magazine in New York. 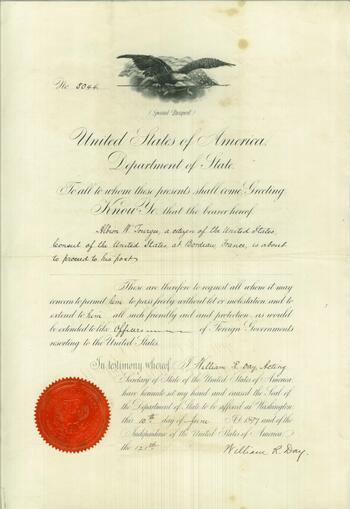