Hot Plowshares published in serial form in The&nbsp;Continent in 1882-83 and published in book form in 1883 is considered to be last of Tourgee’s Reconstruction novels, focusing on the Northern attitudes towards race. His main protagonist is a young woman, Hilda Hargrove, who lives in a small town in New York where she attends an elite all-girls school. She and those around her react in different and often negative ways to the discovery that she is “tainted” with Negro blood.

The novel influenced African American author Charles Chestnutt to write his version of the plot in his 1928 book, The Quarry that features a man, Daniel Glover who is abandoned by his white family for reasons of his mixed ancestry. Both Hilda and Daniel eventually discover that they are not of mixed racial ancestry, but unlike Hilda, who re-enters white society to be with her true love, Daniel finds love in black society and hides his discovery from his loyal and loving African American lover and her family. In both cases, the authors write about a divided society that forces people to make choices and continue to live in separation and in judgment of each other. This is one example of the younger generation of writers and activists influenced by the writings of Tourgee as they attempted to "humanize" the larger social and political issues of racial segregation and prejudice. 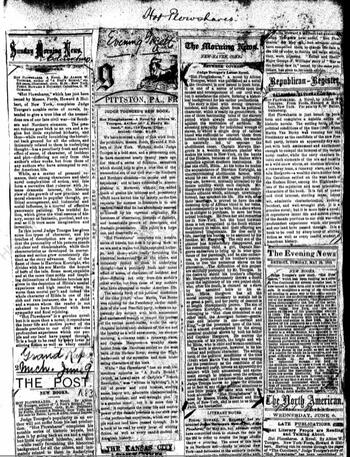