The View from the Expo

The Columbian Exposition of 1893 was an opportunity for many different groups and individuals to draw national and even world attention to their achievements and to their struggles. The cause for women’s suffrage was just as hotly and widely debated at this time as the cause for securing equal rights for African Americans. Oftentimes, those involved in one were just as caught up in the other, and Albion Tourgee was one of those people.

Susan B. Anthony wrote to Tourgee in June 1893 for purposes of enlisting him as a potential speaker for the National American Woman Suffrage Association program of the Woman’s Branch of the World Congress Auxiliary for the 1893 Columbian Exposition. She writes:

Mr. Wm Dudley Foulke – the Chairman of the Department of the Government Congress Committee, deputizes me to secure some able men to discuss the question of popular suffrage – in general – or in some or all of its restrictions – and since mailing my scribble to you – it comes to me that you are just the very man to set forth the whole subject. You see so many of our public men – politicians & editors – are like the Iowa Republicans – and Ingolls etc. – not half believing in the ballot – as the underlying principle of our government – and of all just governments – that they are unfitted to write on the subject – while you – are fit – because you do retain the belief in suffrage as a principle - …I do not know of a single person – man or woman – who feels the need of every citizen’s being a voter as you do – unless it is my friend Mrs. Stanton… 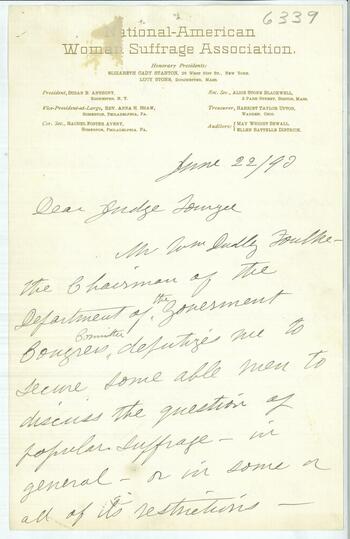