In his book, Pactolus Prime (published 1890), Tourgee once again uses the fictional novel to raise public consciousness of the connection between the legacy of enslavement and the national crisis of illiteracy and its impact on suffrage. He felt that these problems were rooted in the slavery had impacted the entire country, and therefore requiring a national remedy, namely a national plan for public education. There is a point in the story at which two of the main characters, Prime and the Senator, are arguing over the merits of the National Education Bill.

One instance reflecting the influence of Tourgee’s experiences and works upon other writer’s is found in a letter Tourgee received in July 1891 from a J.E. Bruce in Washington, D.C. In his letter, Bruce writes:

I personally want to thank you for giving to the American people Pactolus Prime which I have read eagerly as I do all your writings. I think pactolus prime is written in your happiest vein and that it will make the people of your race think on the great wrongs they have done to my race…Many years ago I met you in the lobby of the Revere House, Boston. I was then quite a youngster and had wandered east in quest of employment to be able to care for my dear old invalid mother, whose health had been destroyed by exposure and the brutality of the southern task master….Bricks Without Straw and A Fool’s errand had just been issued from the press and you were making political speeches – your name was in every man’s mouth certainly in the north of every negro who could read. You were pointed out to me by ex Governor Rice and I came over where you sat and introduced myself and asked for your autograph. You took my little black book and wrote ‘Make the spelling book the scepter of national power – AW Tourgee’ I have that sentiment and autograph pasted on the first page of my scrapbook, and prize it more than you can ever know…I am still struggling to make a place for myself in the domain of intellect and am doing all I can in my weak way to make the spelling book the scepter of national power. I am self-taught never had any advantages, have always been and am now anxious to do something to advance the interests of my race. ..I thank God that he has given us such a man as you to speak for us…

’For right is right since God is God,
And right the day must win;
to doubt would be disloyalty;
to falter would be to sin’

I send you one of my little pamphlets which I trust you will do me the honor to read – also a sketch of my life – If I’m able I would like to have all of your published books. I am going to review Pactolus Prime for my syndicate letter and will be glad to do whatever I can to increase its sale. I talk to a large constituency every week.

The letter was written by John Edward Bruce, who at age 35 was a recognized African American journalist, writing under the name “Bruce Grit” for various newspapers, including Thomas T. Fortune’s New Age. 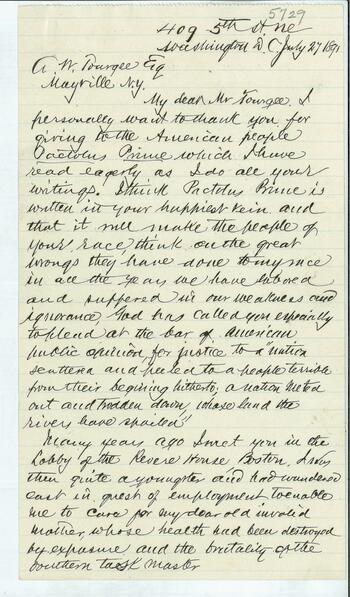