Struggles with the Klan

Acts of violence on citizens, both prominent and ordinary, continued unabated. Republican State Senator John W. Stephens was murdered by the Klan in the Caswell County Courthouse in May 1870 and, Wyatt Outlaw, an African American Town Commissioner in Alamance County was lynched by the Klan soon after. In response, Governor Holden declared these counties in a state of rebellion and under martial law, suspending the writ of habeas corpus.

Whatever Holden’s motivations may have been in taking this action, one thing is certain, there was abundant evidence of violent crimes being committed, but a lack of prosecution for these offenses. Information about atrocities committed by the Klan during this time are described in local newspapers, federal records and reports of the U.S. Congress, and in court records of judges such as Tourgee himself, who heard hundreds of depositions over his six years as a Superior Court Judge for North Carolina. The collection contains affidavits of testimony and confessions as well as warrant, for Klan crimes, including those found in Tourgee’s docket book for cases that came before as Judge. His knowledge of Klan activity led him to draft a lengthy piece for publication, There are two versions of Tourgee’s draft article, “The Ku Klux War in North Carolina” in the collection. 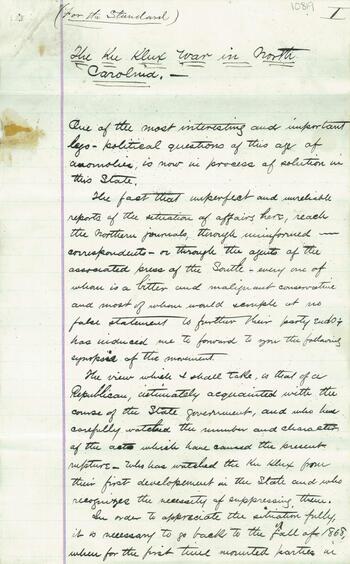