Tourgee left the military in December 1863, returning home to his young wife in Ohio. He was now a veteran among thousands of others who had been severely physically and emotionally impacted by the conflict that had torn the nation apart. For Tourgee, the decision to move his family to the South was an act of personal health and a belief that both he and his country could start anew.

In June 1865, Tourgee received a letter from North Carolina’s newly appointed provisional Governor William H. Holden; apparently a response to a letter sent to Holden by Tourgee, seeking advice on whether or not to make the move. Holden’s correspondence with Tourgee indicates he was in favor of enticing white labor and capital from the North to his state in hopes of rebuilding an economic infrastructure that had been destroyed by the war and subsequent emancipation of the enslaved people who had been the backbone of the labor force. Inviting Northern interests was not a policy shared by all leaders in the South, especially when “Union” politics and culture was likely to accompany it. 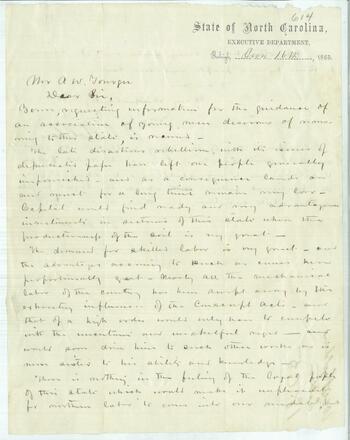