In 1883, Emma Lazarus, a well known literary figure and activist from New York City, wrote “The New Colossus,” a poem inspired by the immigrant experience and written as part of a festival launched to raise funds for the Statue of Liberty’s pedestal. The statue had been a gift from France, designed by French sculptor Frédéric Auguste Bartholdi, to celebrate Franco-American friendship and America’s dedication to freedom following the American Civil War. It was dedicated by President Grover Cleveland in 1886.

While working on the poem, Lazarus was involved with efforts to help Russian Jews immigrate to the United States. Not an immigrant herself, it was this experience working with immigrants that was probably the inspiration for her famous words, “Give me your tired, your poor, your huddled masses, yearning to breathe free.” Her poem forever impressed on the world the idea of the Statue of Liberty as the icon of immigrants hoping to achieve “the American Dream.” In 1903, the poem was enshrined at the base of the statue in a plaque.

After World War II, the magnitude of German atrocities and the plight of people displaced by the fighting slowly shifted the public’s opposition to taking in refugees. President Harry Truman, who took office upon the death of Franklin Roosevelt in 1945, favored a more liberal refugee policy.

Congress did not agree. Truman took what action he could through several executive orders and was able to admit about 40,000 refugees from 1945 to 1948. Two pieces of legislation, the Displaced Persons Act of 1948, and the Refugee Relief Act of 1953, allowed about 600,000 refugees and displaced persons entry into the United States. Many of the people who emigrated under the 1953 law were fleeing Soviet and eastern European Communist rule.

American immigration policy otherwise remained highly restrictive and, aside from these two laws for the limited entry of certain displaced Europeans, was consistent with the national quota system set up in 1924. The main exception to this was immigration from Puerto Rico, a United States territory. Since Puerto Ricans were American citizens, they had the right to travel to the mainland and settle there with no restrictions. Passenger jet travel was important in facilitating migration from the island. As Puerto Rico governor Luiz Muñoz Marín reportedly quipped, “There ain’t no buses running from the Bronx to Mayagüez.” The Puerto Rican population of New York City increased tenfold from 1940 (61,000) to 1960 (613,000). Today, about one million residents of Puerto Rican heritage live in New York City. Other major centers of Puerto Rican population in the state include Rochester (22,000), Buffalo (17,000), Albany (5,000).

There was a major shift in United States immigration policy when in 1965, with the Statue of Liberty as a backdrop, passage of the Immigration and Nationality Act, also known as the Hart-Celler Act, was signed by President Johnson. The Immigration and Nationality Act took effect on July 1, 1968 and contained several major provisions. It eliminated the national quota system and replaced it with a preference system based on seven criteria, including priority for relatives of naturalized citizens and legal permanent residents. The law had two main effects: it dramatically increased the number of immigrants arriving to the U.S. and diversified the ethnic composition of those new arrivals. In 2017, for example, 44% of immigrants came from other countries in the Western Hemisphere (especially Mexico, the Caribbean, and Central America), 38% came from Asia (especially China, India, the Philippines, and Vietnam), and 11% from Africa. Only 7% came from Europe. Although most immigrants settled in larger cities, this recent migration has transformed every part of New York State. 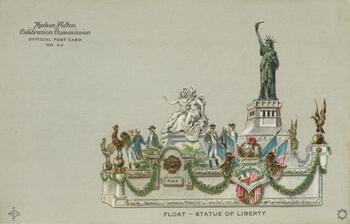 The Statue of Liberty Enlightening the world, which stands on Bedloe's Island in New York Harbor, was presented to the United States by the people of France as a memorial of the ties of friendship that have united two nations ever since the French Army and Navy helped the Americans with their national independence. 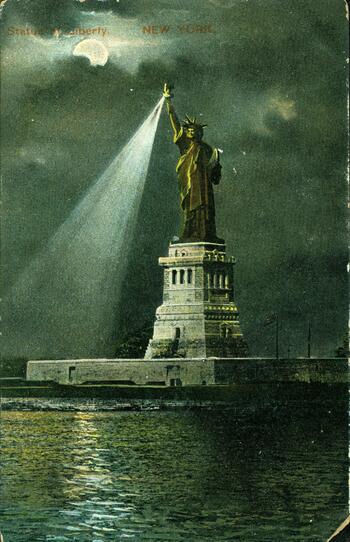 A color postcard depicting the Statue of Liberty in the evening. 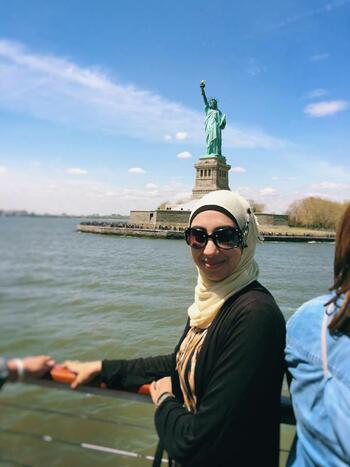 The Statue of Liberty continues to be an icon for new immigrants. 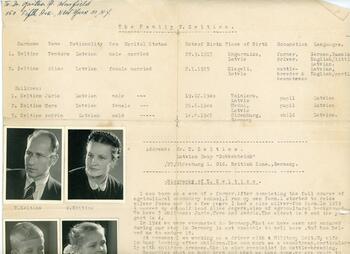 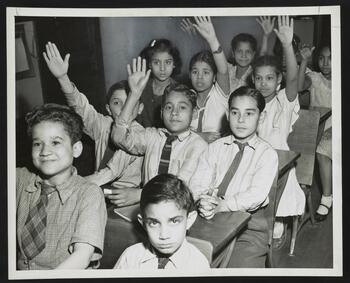 A classroom of Puerto Rican children in New York in 1947. 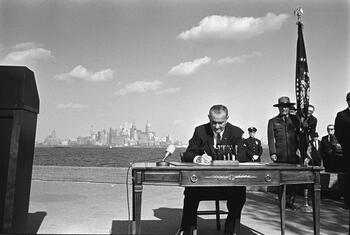 Signing of the Immigration and Nationality Act, 1965, courtesy of LBJ Presidential Library.

President Lyndon B. Johnson signing the Immigration and Nationality Act of 1965.