New York State is the epicenter of immigration history in America. New York’s diversity of people, persistent through the centuries, is evidence that nowhere else has the immigration story been so often told and so often experienced.

Before the first European immigrants arrived in what is now New York, there were several indigenous communities living there, including the Lenape (Delaware) in New York City, the Shinnecock in Long Island, and the Haudenosaunee Confederacy (Mohawk, Oneida, Onondaga, Cayuga and Seneca) to the west. The earliest Europeans to live in New York were predominantly French fur traders to the west and Dutch fur traders to the east. In 1624 the Dutch West India Company established its first permanent colony of New Netherland on Manhattan Island.

In addition to indigenous peoples, New Netherland’s seventeenth-century population included the Dutch, English, Swedes, Finns, Germans, Scandinavians, French, Scots, English, Irish, Jews, Italians, Croats, and Walloons from Belgium. Both free and enslaved Africans were also living in the colony.   In 1647 Peter Stuyvesant became Director-General of New Netherland. His efforts to keep the colony “Dutch” would ultimately fail. By 1650, 25% of the population was non-Dutch, and by 1664, the colony was the most heterogeneous than any other in North America.

Stuyvesant’s rule over New Netherland prohibited any open worship outside of the Dutch Reformed Church, despite the presence of Lutherans, Quakers, Mennonites, Roman Catholics, Jews, and Puritans. In 1657, with the support of their Dutch neighbors, several leaders of the different denominations submitted a petition to Stuyvesant to lift his ban. This petition, known as the Flushing Remonstrance, is often considered a precursor to the United States Bill of Rights and the guarantees to freedom of religion in the United States.

From this first Dutch governance to the present day, a fear of “foreign influence” has persisted, manifested in social norms and economic policies. But so too has been the immigrant expressions of resistance to acts of exclusion and oppression, first exemplified by the Flushing Remonstrance.

Most immigrants came to New Netherland (and later New York) to farm and eventually own land–transitioning the colony from a focus on fur trading to a dependence on agriculture. The Dutch West India Company’s efforts to secure control of the colony was first manifested with offers of private land ownership called “patroonships.” This involved granting large tracts of land to private individuals who would pay for indentured labor to immigrate to the colony and work on the land. The patroons would also provide the Company with a percentage of the value of products raised from the land, either livestock or agriculture.

This system of land ownership was short-lived. Many of the indentured immigrants who arrived to work the land of the patroons would return to Europe when their terms expired. But some became free farm laborers on Long Island, to whom they would be politically subordinate to the Company, but now economically independent. Lands were also acquired by European settlers directly from indigenous people, often under uncertain terms, creating tensions and even armed conflicts, including what became known as the Esopus Wars between the Esopus tribe of Lenape and the Dutch settlers in Ulster County, New York. 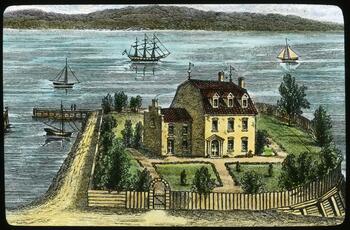 Peter Stuyvesant's governor's mansion was named "Whitehall" by the British after their takeover of the settlement in 1664. 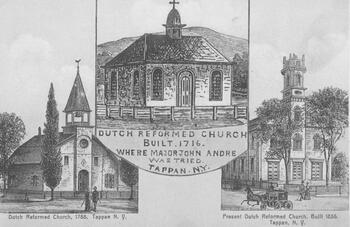 The Dutch Reformed Church was the only church allowed to openly worship under the rule of Peter Stuyvesant. 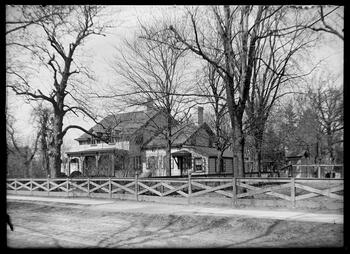 John Bowne's courageous non-violent protest against Stuyvesant's religious persecution took place at his home in Flushing, where he invited Quakers to worship in his home in 1662. 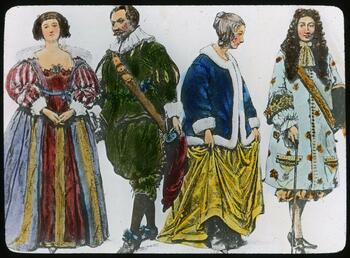 This tinted engraving of two men and two women depicts Dutch-style clothing in the colonial era. 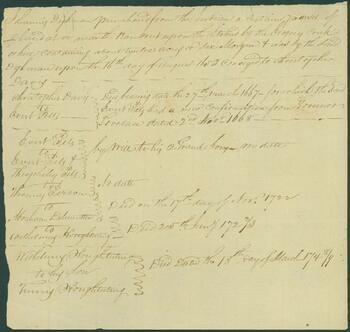 This states that Johannis Dyckman purchased, from the Indian, land containing 12 acres or 6 morgens. This land was then conveyed to Christopher Davis. The land was located at or near the Rondout by the Esopus Creek. 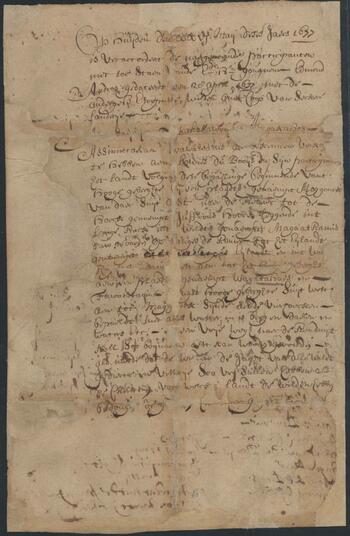 This contract between the group of twelve Huguenots and the Esopus Indians transferred ownership of roughly 40,000 acres of land that would become the New Paltz Patent. 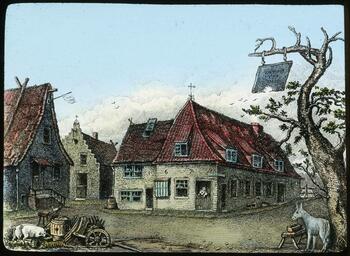 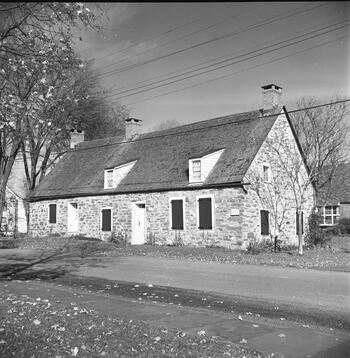