Castle Garden opened as an immigrant landing depot in New York Harbor on August 3, 1855 and remained open until April 18, 1890. The former War of 1812 fort had been operating as an opera house and theater prior to the grounds being leased by New York City to the State Board of Commissioners of Emigration. More than eight million immigrants passed through the facility before it closed in 1890. In the two years that it took Ellis Island to open, immigrants entered the Federal Barge Office for processing.

Ellis Island became the new center for immigration by virtue of the Immigration Act of 1891, which also created the position of a federal Superintendent of Immigration and a Bureau of Immigration under the supervision of the Treasury Department. The original building at Ellis Island burned to the ground in 1897, destroying most of the records of those who passed through its gates. After it was rebuilt in 1900, the number of immigrants continued to grow until the peak year of 1907 when processors recorded 21,000 immigrants passing through in a single day. Between 1901 and 1915, 12.9 million immigrants came to the U.S., with many of them passing through Ellis Island.  Immigration to the United States slowed to a trickle during the World Wars. Ellis Island finally closed in 1954.

Approximately two out of every three immigrants who entered the country around the turn of the twentieth century came through New York City. Many migrated upstate, mainly in search of economic opportunities. Many joined friends or relatives in New York and elsewhere. Early German and Irish migrants to Upstate New York in the nineteenth century found work building the Erie Canal in the growing population centers of Albany, Syracuse, Rochester, and Buffalo. Other immigrants decided to settle further west. The route they took was up the Hudson River to Albany by steamboat, on to Buffalo by canal boat, then to Cleveland by steamboat. From there, they would travel the Ohio River by canal boat, and then by river boat to Cincinnati, completing their trip to destinations such as Indiana, Illinois, Missouri and Kansas by wagons over rough terrain. 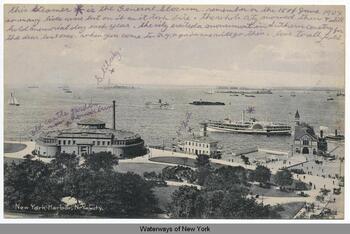 An aerial view of New York City harbor with Fort Clinton Monument in the foreground and the Statue of Liberty and Ellis Island in the background. Prominently featured is the famous sidewheeler, the General Slocum, which caught fire in 1904. 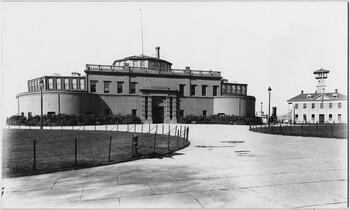 Undated view of Castle Garden, an immigration landing depot between 1855 and 1890, located on Manhattan.

Commercial fisherman Fred Johanssen tells stories of his family, including his father's and grandfather's adventures, as well as discusses shad, striped bass, the family marina/boat yard, declining fish populations, and his love of the river.