The second major wave of immigrants to the United States included a group coming from an entirely different direction; Asian immigration to America’s west coast exploded in the mid- to late-1800s. The immigration and settlement of Chinese, taking place predominantly in the western regions of the U.S. was nevertheless being warily observed and reported on by New York newspapers. It was not at all unusual to see various ethnic slurs used to collectively describe the Asians in print, including: "John Chinaman," "yellow peril" and "coolies."

On May 6, 1882, President Chester A. Arthur signed an act “To Execute Certain Treaty Stipulations Relating to Chinese,” more commonly known as the Chinese Exclusion Act, into law. This act was the first to restrict immigration and naturalization along racial lines, suspending the entry of both skilled and unskilled Chinese laborers into the United States for a period of ten years. The ban on Chinese immigration was extended another ten years by the Geary Act and then extended for decades after that by further legislation. The Chinese Exclusion Act was eventually repealed by the Magnuson Act in 1943.

Xenophobia and nativism continued to grow in America in the early twentieth century. In 1907, Congress formed the United States Immigration Commission, commonly referred to as the Dillingham Commission after its chairman, Senator William P. Dillingham of Vermont. The bipartisan commission included experts like Cornell University economist Jeremiah Jenks and accumulated mass data about immigration trends and policy. Their highly influential 1911 report concluded that the heavy influx of Southern and Eastern European immigrant groups posed a particular threat to American society's moral and social well-being because those immigrants tended to be non-English speaking Jews or Catholics. The committee noted that the women from these groups tended to work outside the home, which was anathema to American culture at the time. The report recommended that Southern European, Eastern European, Korean, Chinese, and Japanese immigration be dramatically reduced.

The Johnson-Reed Act of 1924, formerly titled “An Act to Limit the Immigration of Aliens into the United States, and for Other Purposes,” established quotas based on two percent of each nationality’s foreign-born proportion in the U.S. at the time of the 1890 census. The legislation, signed into law by President Calvin Coolidge, was influenced by the pseudo-science of eugenics, which held that races and ethnic groups could be ranked into so-called “superior” or “inferior” categories. Henry Laughlin, superintendent of the Eugenic Records Office in Cold Spring Harbor, New York testified in the passing of the legislation. In Coolidge’s words, “America must be kept American.” This drastically limited immigration to the United States, especially those from Asia, Southern and Eastern Europe. In fact, in 1924, more Italians, Czechs, Yugoslavs, Greeks, Lithuanians, Hungarians, Poles, Portuguese, Romanians, Spaniards, Chinese, and Japanese left the United States than arrived as immigrants. Eastern European immigrants continued to come to America and to make significant contributions to national, state, and local communities.

When the Quota Act of 1921 was passed, it extended even more restrictions on Chinese immigrants in particular. At the time, Asians made up fewer than 10,000 of New York City’s 6,000,000 residents, and most of those were men. This meant the Chinese wives of these men were not allowed to enter the United States, which subsequently meant the ratio of men to women exceeded six to one. With a male-dominated population, the neighborhood in New York City referred to as “Chinatown” was rumored to have opium dens, prostitution, and slave girls, exacerbating white prejudice against the Chinese. But Chinatown also became something of a tourist attraction after 1900 because it was looked on by the white population as an “exotic” place.

Although the framers of the 1924 law could not know it at the time, its provisions would bar Jewish refugees fleeing areas overrun by Nazi Germany during World War II. Between the Nazi seizure of power in 1933 and Germany’s defeat in 1945, the U.S. took in only 132,000 Jewish refugees. About 1,000 Jewish refugees were housed in Oswego at the Fort Ontario Emergency Refugee Shelter. They arrived in June 1944, and “Safe Haven” remained their home until the camp closed in early 1946. Although they were saved from the Holocaust, they were not permitted to work or leave the shelter for longer than six hours at a time.

The Immigration Act of 1924 also created the U.S. Border Patrol, established as an agency of the Department of Labor just two days after the Act passed. This new border patrol was primarily tasked with catching alcohol smugglers along the Southern border during Prohibition, but they found smugglers transporting undocumented immigrants as well. In 1952, their jurisdiction and authority expanded to allow the search and arrest of illegal immigrants anywhere within the country, not just at the borders.

Not only were “potentially troublesome” and ill immigrants prevented from entering the country, but under the quota system, between 10,000 and 20,000 immigrants were deported annually between 1926 and 1933, mainly in an effort to control immigration’s impact on the American labor market. Under an 1891 law, deportation had a statute of limitation of one year after arrival. This time limit was removed in 1952.

After the terrorist attacks of September 11, 2001, the newly formed Department of Homeland Security merged several federal law-enforcement agencies with the Border Patrol to create a new combined agency called U.S. Customs and Border Protection (CBP). During the decade leading up to 2009, agents apprehended nearly 13 million aliens attempting to enter the United States illegally. In 2019, of the 859,501 total illegal alien apprehensions reported by the Border Patrol, 537 were from the Buffalo, New York sector. 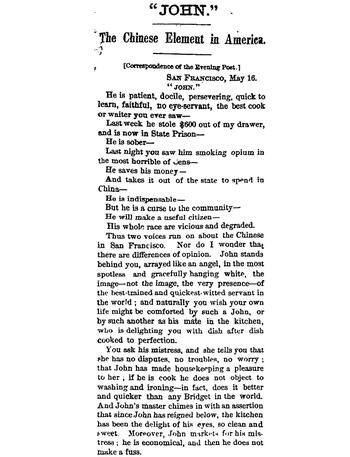 "John" The Chinese Element in America, from the Evening post., May 25, 1871, Page 1, courtesy of New York University.

An article appearing in the Evening Post in May 1872, states, “John (sic) is inevitable. He has discovered America, and he finds it a good country. We shall not keep him out. But it is ours, and not his, to determine whether he shall be a blessing or a curse to us.” 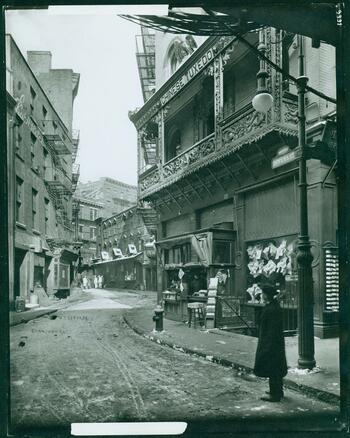 A view of Manhattan’s Doyers Street, also known as the “Bloody Angle” because of gang-related violence. This short street is now home to a stylish restaurant named Chinese Tuxedo, after the original, and an employment agency that serves new immigrants. 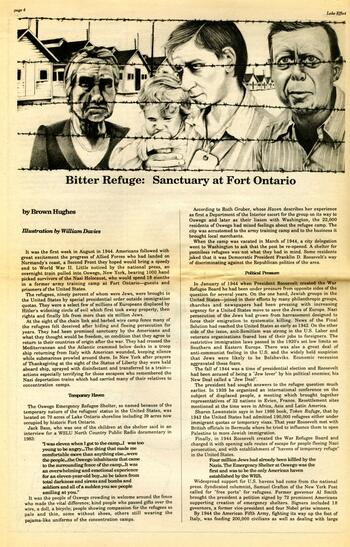 By 1944, knowing that 4 million Jews had already been murdered by the Nazis, American Jewish groups pressured President Roosevelt to respond to the crisis in Europe by establishing the War Refugee Board, or WRB.  The Oswego sanctuary was set up as the first and only WRB refugee safe haven. 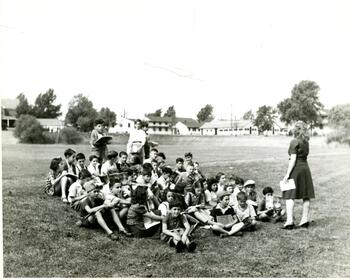 Inside the Camp, circa 1945, courtesy of Oswego Public Library.

Grown children from the Safe Haven camp recalled it feeling “wonderful and terrible,” recognizing that they were among the few saved.  Former resident Walter Grunberg reflected “I think that we were the token shipment.” 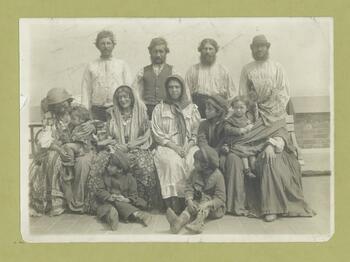 Hungarian Gypsies all of whom were deported, 1905, courtesy of New York Public LIbrary.

Photograph in The New York Times on Sunday, February 12, 1905, showing a family of Hungarians to be deported. 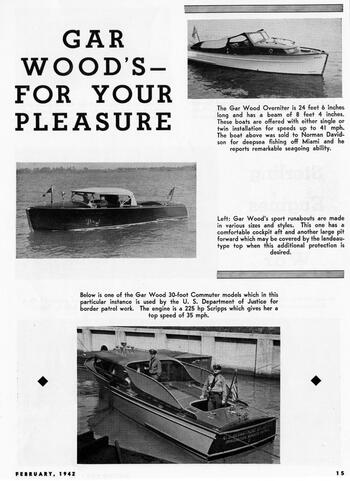 Gar Wood's for Your Pleasure, 1942, courtesy of Antique Boat Museum. 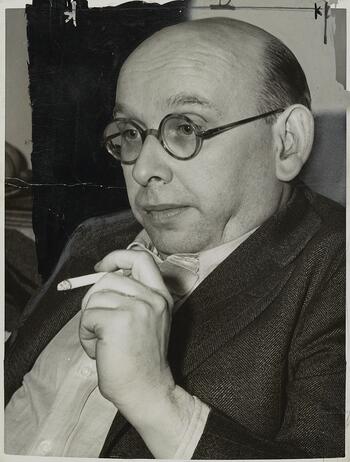 Hanns Eisler, the famous Austrian composer known for his collaborations with Bertolt Brecht, managed to emigrate to the United States with a permanent visa in 1938. He taught at the New School for Social Research in New York City for several years before moving to Hollywood. His affiliations with Communist and Socialist organizations led to interrogations by the House Committee on Un-American Activities, and by 1948 he was issued a deportation order for having been a member of the German Communist Party.