By the mid-nineteenth century, immigrant and native-born workers began to form unions to protect themselves. In the 1870s, the Knights of Labor united old-stock skilled workers and early emigrants from Ireland, Great Britain, and Germany in a movement to maintain autonomy and wages. Samuel Gompers, a Jewish immigrant from the United Kingdom whose family settled in New York City, had an immense impact on the burgeoning labor union movement.  Gompers continued his father’s trade as a cigar maker—becoming involved in local unions and rising up through the ranks before founding the American Federation of Labor (AFL).  The AFL, like many unions at the time, favored restrictions on new immigrants as a means to keep wages higher.

Exclusive AFL-affiliated unions of skilled German, Irish, British, and American workers routinely barred female, Black, or Southern and Eastern immigrant workers from membership, viewing them as “wage depressors.” Regardless of their membership composition, union leaders sought to reform capitalism and restrict corporate power through collective bargaining or by exerting political pressure on the legislators who courted immigrant votes. For union members, these rather lofty goals more immediately translated into fulfilling their demands for fair wages and hours and improved working conditions. 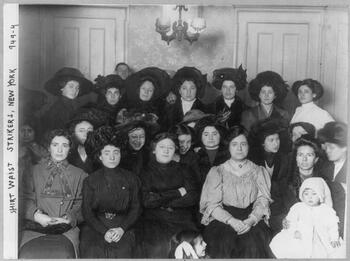 Shirtwaist workers on strike in January 1910, 15 months before the Triangle Shirtwaist Factory fire.  The majority of these workers were young, female Jewish or Italian immigrants. Because these workers were excluded from the male-dominated AFL, they formed their own union, the International Ladies' Garment Workers Union. 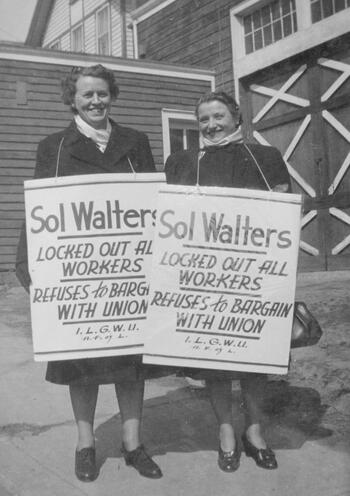 Two members of the International Ladies' Garment Workers Union hold signs which read, "Sol Walters Locked Out All Workers Refuses to Bargain with Union." The woman on the right is Anna Stein and was Myra Starr's grandmother. Anna went to work at Sol Walters, 21 Burd Street, Nyack after World War II. At the time she was a widow. The picture was taken in front of the Sol Walters factory. 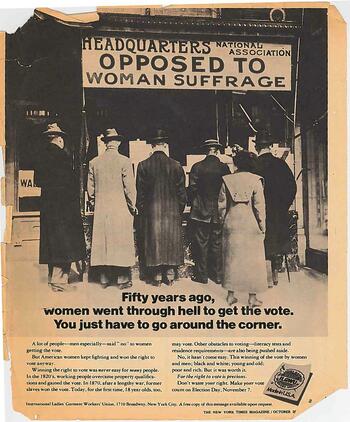 An ad taken out by the ILGWU reminding Americans to vote in the 1970s.   The ILGWU was founded in 1900 by male Jewish immigrants who were highly skilled European tailors trying to better organize their industry in the US. 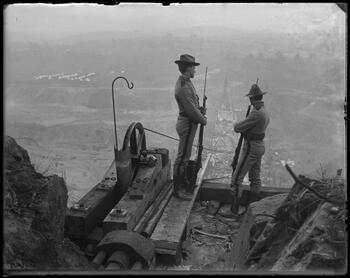 The New Croton Dam in Westchester County was finished in 1906 and provided NYC with fresh water from the New Croton Reservoir.  The dam was largely built by immigrants, including stonemasons recruited from Southern Italy to move to New York.  Italians in particular were underpaid during the construction of the dam, and dangerous conditions paired with low wages led to a general strike in 1900.  Governor Theodore Roosevelt sent in soldiers to protect the dam construction.  The strike ended after three weeks with little improvement for the workers.