An indication of increasing immigrant prosperity is the rising frequency of homeownership by 1930.  For both immigrants who remained in the New York City metropolitan area and immigrants who migrated upstate, owning a home was a symbol of upward mobility and represented a lasting commitment to life in the United States.

Some of the most industrious immigrants opened businesses catering to their compatriots. As neighborhoods grew, respective customers could shop at Greek grocery stores, stay at Italian boarding houses, watch Yiddish theater productions, worship at Polish-language churches, or patronize German or Irish taverns.

Between 1873 and 1922, Polish-Americans established 34 church parishes in Western New York. Many of them first settled in the Broadway-Fillmore, Clinton-Bailey, Black Rock and Riverside areas of Buffalo, then later moved to suburbs of Cheektowaga, Depew and Lackawanna. From its earliest days as an urban neighborhood, the Broadway-Fillmore area was home to a large community of Polish immigrants. Known as the “Polish colony,” embraced as many as 100,000 Polish-Americans in the early twentieth century.  Buffalo, in fact, had the sixth largest Polish-American community in the United States at the turn of the century. Today, the community’s annual week-long Dyngus Day Festival; a Christian celebration of the end of the lenten fasting period with roots in pre-Christian Slavic rites of Spring, remains the largest in America. 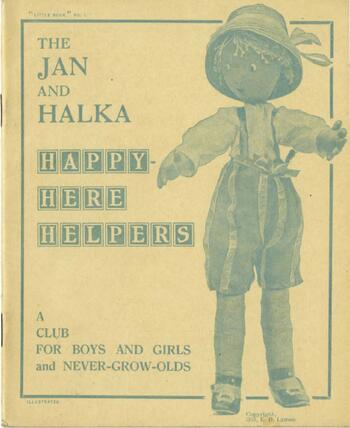 Jan and Halka Happy-Here Helpers: a Club for Boys and Girls and Never-Grow-Olds, 1916, courtesy of University at Buffalo

Some of Buffalo’s Polish residents were refugees of the World War I era, as the Russian, German and Austro-Hungarian Empires all fought over historically Polish lands and millions of ethnic Poles were displaced.  This 1916 booklet was for children in America, designed to tell them about “refugee Jan and Halka and their homeless friends, the war-time waifs from Poland, ‘The Saddest Land’.” 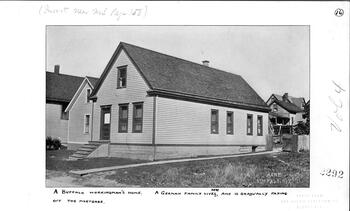 A house in Buffalo around 1912.  A caption on the proof notes that "a German family lives here, and is gradually paying off the mortgage." 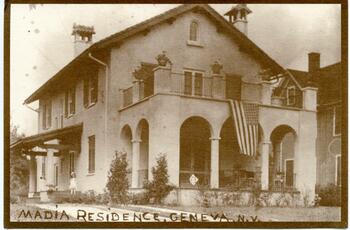 Joseph Madia, born in 1876 in Italy, immigrated in 1893 and settled in Geneva, where he owned an iron foundry and operated a grocery store. 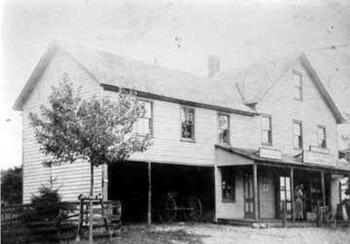 Black and white photograph showing the William Schneider store at the corner of Walt Whitman Road and Schneider Street in Half Hollow.  Dances, elections, and even wedding receptions were held in the room over the barn. William Schneider’s father, also named William Schneider, immigrated to Long Island from Germany in 1871 with his wife Lizzie. 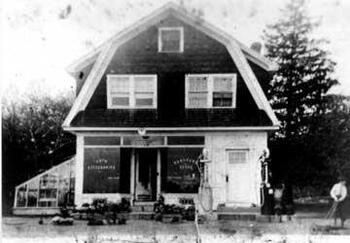 Glaab's Hardware Store, circa 1930, courtesy of Half Hollow Hills Library

Glaab's hardware store, circa 1930 on Route 110 in Melville, New York. In addition to hardware, auto accessories, seeds, and its own greenhouse, it had a gas pump, as many stores did at the time. The family’s eleven children also took turns manning the produce stand on Route 110.  Valentine Glaab, born in Germany in 1861, immigrated to Long Island in 1882 and worked as a mason. His son Charles, born in New York in 1888, ran the hardware store after working as a farmer and carpenter. 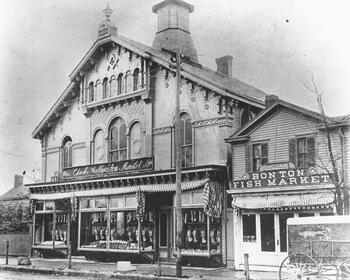 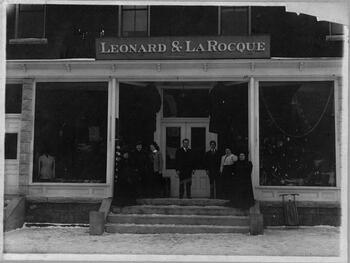 Nella Larocque was born in 1875 in Canada and established a dry goods store in Tupper Lake with William C. Leonard, a native-born resident of Franklin County. 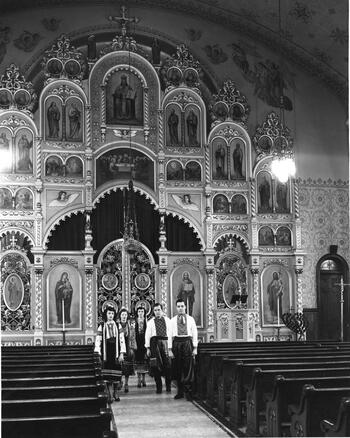 Five worshippers at St. John the Baptist Ukrainian Church in Syracuse in the 1940s, all children of immigrants.  Of these five young adults, only one parent was born in the United States.  The other nine parents were born in Slovakia, Russia, Poland, Ukraine, Canada, or Austria in the 1880s or 1890s. 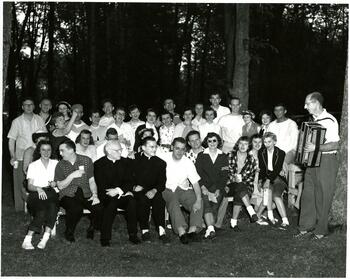 Decades after the first immigration wave of Poles in Syracuse, the Polish-American community kept a vibrant community busy with activities like bowling and choirs.