In 1798, President John Adams convinced Congress to pass a series of four bills that became known as the Alien & Sedition Acts. Adams feared that American involvement in a war with France would be spurred by pro-French political leaders and French immigrants. The new laws increased residency requirements for U.S. citizenship from 5 years to 14 years, thereby restricting immigrants’ right to vote and access to other rights of citizenship. The laws allowed the government to arrest and deport all male citizens of an enemy nation in the event of war. Furthermore, the president could deport any non-citizen suspected of plotting against the government, even in peacetime. These new laws also made it illegal to publish attacks on the President or Congress.

These laws were immensely unpopular in government and with the public. It was seen as an attack on the newly established First Amendment to the Constitution that protected freedom of speech. By 1802, most of the laws had been repealed. An important side effect of this was the removal of the national capital from New York to a newly created federal District of Columbia along the Potomac River in the South.

As immigration to the U.S. accelerated through the nineteenth century, legal and social backlash increased in accordance. Between 1815 and 1914, the U.S. experienced three great waves of immigration. During the first wave, from 1815 to 1860, about five million immigrants arrived in the U.S. The second wave, from 1860 to 1890, included the arrival of another ten million. The third wave lasted from 1890 until the outbreak of World War I, during which another fifteen million emigrated to the U.S. Most immigrants during the first two waves were from Great Britain (including Ireland), Germany, and Scandinavia. During the third wave, the primary sources of immigration shifted to southern and eastern Europe: Slavs from the Austro-Hungarian and Russian Empires, Italians, and Jews from what is now Poland and Ukraine.

In 1835, during this first wave of immigration, a group of New Yorkers organized a new state political party, the Native American Democratic Association. This group of mainly white, Protestant, American males organized in opposition to the surging numbers of immigrants. The party was organized partly in reaction to Samuel F.B. Morse, the inventor of the electromagnetic telegraph. Morse wrote a series of articles in his brother’s newspaper, the New York Observer, warning readers that the Catholic Church and Austrian Emperor were deliberately sending Irish and German Catholics to the United States to subvert its liberties and turn the country into a satellite of the Pope and Austria.

The group became known as “nativists” and were actively opposed to religious and linguistic immigrant groups, including the Irish Catholics and German-speaking immigrants of all faiths. In 1849, a secret fraternal order was established in New York to promote nativism. Members would profess to “know nothing” when questioned about the organization. By 1852, the Know Nothing political party had become a major third-party force in New York and American politics, including over 40 members of the New York State legislature coming from the Know Nothing party. In 1856, they held their first, and only, national convention for the US Presidency. Former president and New York native Millard Fillmore was their nominated candidate but was easily defeated. The issue of slavery and push for westward expansion soon eclipsed immigration, and the Know Nothing party was dissolved by the 1860 presidential election. 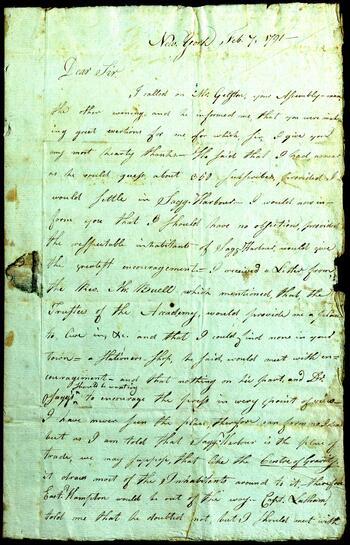 David Frothingham first printed his newspaper in Sag Harbor in May of 1791.  He and his writers were critical of Alexander Hamilton and the Federalists, which led to his arrest under the Aliens and Seditions Act.

A newspaper in upstate New York reflects on the new Alien and Sedition Laws, objecting that “it is expressly contrary to that part of the constitution, which declares, that ‘Congress shall make no law respecting an establishment of religion, or prohibiting the free exercise thereof, or abridging the liberty of the press.’” 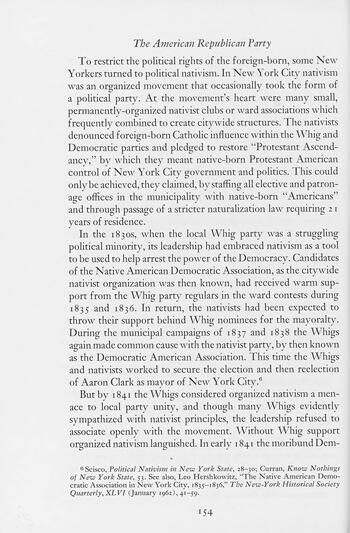 A publication from the New-York Historical Society addressing the history of the Whig party, which used a nativist platform to win the mayoral position of 1830s New York City. 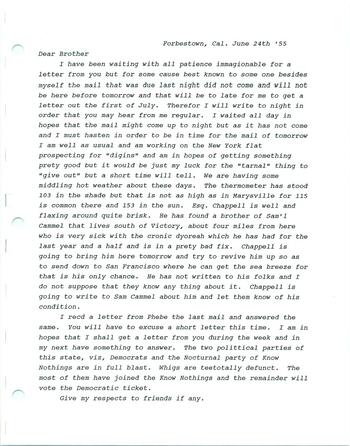 Samuel Hedges, who traveled to California for the gold rush, tells his brother that the Know Nothing party absorbed most of the Whigs of that state. 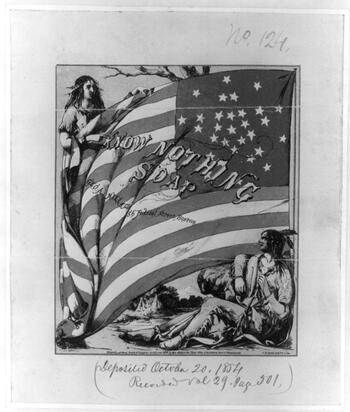 An illustrated advertising label for soap manufactured in Boston, interesting for its imagery and allusion to the popular "Know Nothing" or nativist movement. In the foreground are two American Indians, emblematic of the movement's prejudice against the foreign-born. 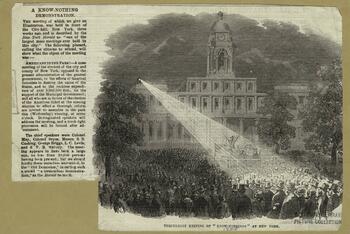 An illustration of a Know Nothing demonstration, which the New York Herald declared as “one of the largest mass meetings ever held” in New York City.