Publicity for the Antis

Josephine Jewell Dodge, one of the most important leaders of the New York State and national anti-suffrage movement, once said that the anti-suffrage movement represented a “negative organization.” Rather than lead their own crusade, they had to respond to actions and publications of the suffragists with literature, speakers, and press notices.

Anti-suffragists publicized their movement, often using the color pink for their broadsides, in contrast to the yellow used by suffragists. Their broadsides offered messages such as: “Household Hints: Vote No on Woman Suffrage,” “Anti-Suffrage Answers,” and, the word of a henpecked man, “I want to vote, but my wife won’t let me.” Because anti-suffragists subscribed to the mandates of separate spheres and duty to one’s country and its leaders without question, they often reprinted testimonials from “important” men and redistributed them broadly. Anti-suffragists found gender role reversal to be most upsetting, and many postcards and images depict men tending babies or doing housework. While today we find these images very funny, and certainly people of the time would have laughed at them, the underlying message—that proper gender roles stabilized the nation-state—would have resonated with people who feared the dramatic changes expected by the granting of suffrage to women. 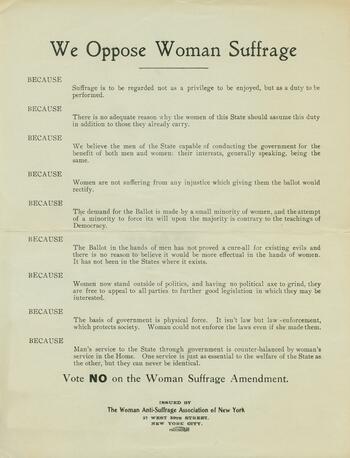 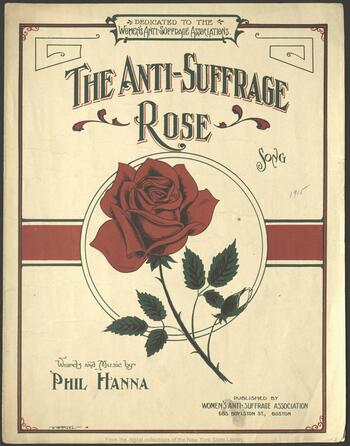 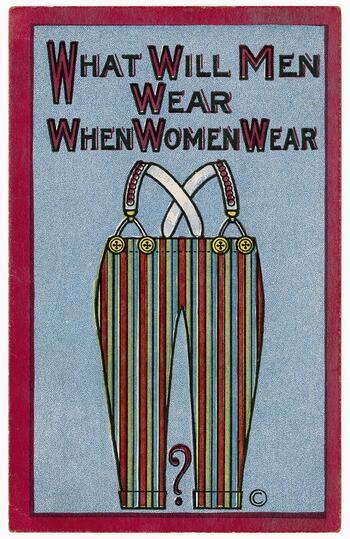 Anti-suffrage postcard that reads, “What will men wear when women wear,” with an image of men’s pants, 1913. Courtesy of The Dovie Horvitz Collection, part of The Gender and Women's Studies Collection in the University of Wisconsin Digital Collections. 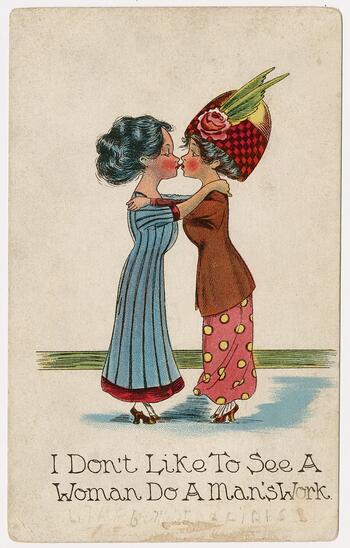 Anti-suffrage postcard depicting two women kissing with caption, “I don't like to see a woman do a man's work.” Courtesy of The Dovie Horvitz Collection, part of The Gender and Women's Studies Collection in the University of Wisconsin Digital Collections.