Imagine that women have the responsibility to choose all political representatives, removing from office anyone who did not address the wishes and needs of the people while looking to the seventh generation ahead. Imagine women living in a world free from violence committed against them, having the final say in matters of war and peace, and having the absolute right to their own bodies. In this society, imagine that women are also responsible for planning the spiritual ceremonies and have economic independence from men. Haudenosaunee (traditional Iroquois) women have had this authority—and more—for centuries before Europeans came to North America.

When women in New York State began to organize for their rights in 1848, they took their cue from the nearby native communities. Haudenosaunee women ignited the revolutionary vision of early feminists by providing a model of freedom and agency. Euro-American women were inspired by the Native American women’s control of their bodies and property, religious voice, custody of their children, satisfying work, and absence of rape and domestic violence. Finally, they saw political equality in action, as clan mothers nominated the chiefs, held them in position, and removed them, if necessary. Everyone had a voice in decisions, women and men equally.
&nbsp; 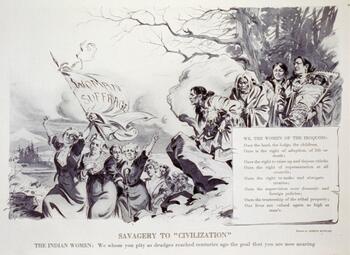 Savagery to "Civilization", by Joseph Keppler. This illustration shows Iroquois women on a rock overlooking women marching with banner labeled "Woman Suffrage". Text reads: "WE, THE WOMEN OF THE IROQUOIS: Own the land, the lodge, the children. Ours is the right of adoption, of life or death; Ours is right to raise up and depose chiefs; Ours the right of representation at all councils; Ours the right to make and abrogate treaties; Ours the supervision over domestic and foreign policies; Ours the trusteeship of the tribal property; Our lives are valued again as high as man's. THE INDIAN WOMEN: We whom you pity as drudges reached centuries ago the goal that you are now nearing." Originally published in Puck, v. 75, no. 1941 (1914 May 16), p.4. Courtesy of the Library of Congress. 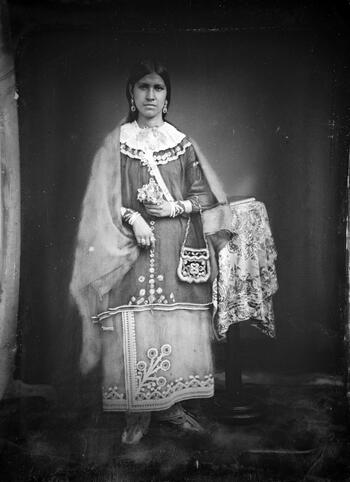 Image of Caroline Parker Mountpleasant. This image depicts Caroline Parker Mountpleasant, a Haudenosaunee woman from the Seneca people, in traditional dress circa 1850. Carolyn Parker's skirt and overdress appear identical to one in the Lewis Henry Morgan collection of the New York State Museum. Several daguerreotypes of Caroline in costume were taken around 1850, including one in which she is shown seated. Courtesy of the Rochester Museum & Science Center. 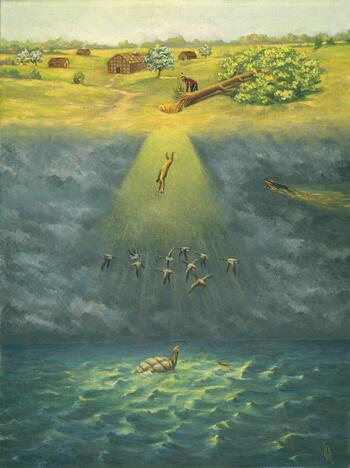 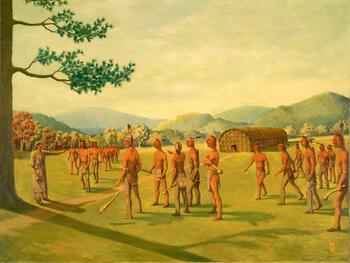 Peace Queen (Jigönsahsé), by Ernest Smith, Jan. 1936. In this painting, two tribes of Indians approach a pine tree beneath which stands an Indian woman pointing to a longhouse. Jigönsahsé (The Peace Queen) stands beneath a tall pine tree, a Haudenosaunee symbol of peace. She directs the war parties (the Erie Nation on the left and the Mohawks on the right) to put down their weapons and enter her house where they will find food and warmth. Jigönsahsé, also called the Mother of Nations by the Haudenosaunee, was a member of the Neutral Nation who once lived near Niagara Falls. According to tradition, she was the person who advised the Peacemaker in his quest to form the Great Law. Courtesy of the Rochester Museum & Science Center.