Suffragists displayed brilliance when it came to promoting their cause--they used traditional ways of promoting events (such as distributing broadsides), as well as unique methods. The idea of packaging their suffrage message in consumer goods gained far greater acceptance after 1900. Enterprising suffragists exploited new ways of getting their message out to women who would then influence men who would support women’s enfranchisement at the upcoming referendum. Suffragists knocked on the doors of their neighbors to talk about women’s voting rights. Pairs of women would go into the streets to get their message out to passersby. One woman would stand on a soap box while the other would pass out woman suffrage novelties such as fans, playing cards, radiator caps, games, and other items, printed with “votes for women” or a similar slogan. Activists mailed suffrage postcards and greeting cards, participated in parades and pageants, appeared in and watched silent movies and theater performances, all to promote votes for women. They wrote songs (set to familiar music), plays, commissioned posters and political cartoons, and distributed convenient printing plates promoting suffrage to newspapers. 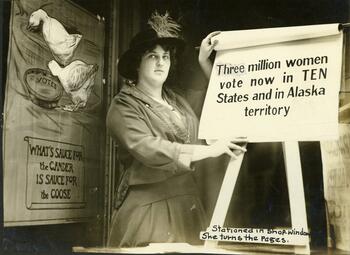 Stationed in shop-window, ca. 1914. Anna Constable came up with an idea that drew crowds of people without having to speak. Standing in a shop window, she held up large placards with simple suffrage statements printed on each, and held up the cards, one by one. Police actually arrested her for “causing a crowd to collect and block the sidewalk,” and suffragists publicized the arrest as well as the idea of the voiceless speeches. Courtesy of Carrie Chapman Catt Papers, Special Collections Department, Bryn Mawr College Library. 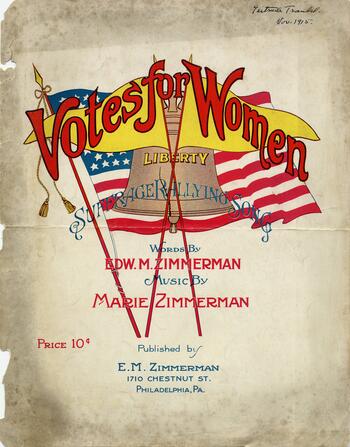 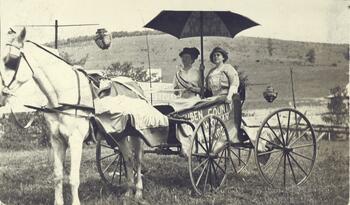 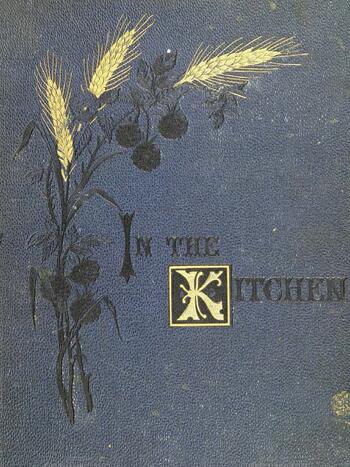 In the kitchen. Women’s suffrage cookbook, 1875. Courtesy of Cornell University via HathiTrust.