Suffragists organized parades during the final two decades of the movement. The parades symbolized greater confidence in the righteousness of the goals of the suffrage movement, solidarity with like minded women, and a willingness to expose oneself to public critique. Parades drew large crowds, with many men jeering at the women for their boldness in publicly displaying themselves. Beginning in 1913, women annually organized huge parades in New York State, at first in New York City along Fifth Avenue. The idea came from Harriot Stanton Blatch, a daughter of Elizabeth Cady Stanton, who observed similar displays during her years living in England where the suffrage movement was a great deal more radical. Women coordinated their garments, hats, and sashes and marched in contingents of professions such as doctors, lawyers, and teachers, often accompanied by bands playing music. Parades became very popular, and thousands of people came to watch the women marching. 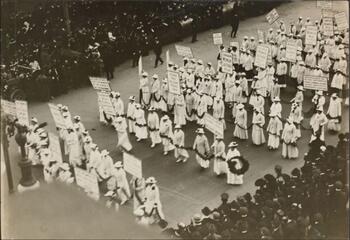 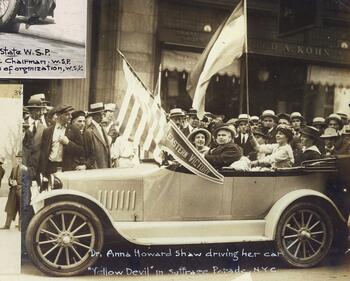 Woman Suffrage Party sash.  The Woman Suffrage Party was a New York City organization that was founded by Carrie Chapman Catt at the Convention of Disfranchised Women in 1909. They were one of the leaders in organizing marches in the city. The colors of the sash were borrowed from those of the National American Woman Suffrage Association of which Catt was twice President. Courtesy of Ken Florey via South Central Regional Library Council. 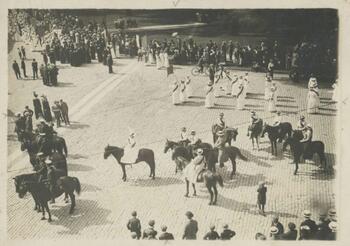 Albany, New York, Suffrage Parade Forming at City Hall, June 6, 1914. At the time, the parade was publicized as “the biggest thing in the line of a suffrage parade ever seen outside of New York City.” Courtesy of Albany Public Library. 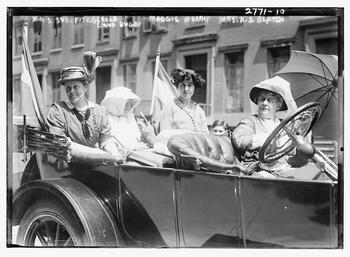