With the merger of the National (NWSA) and American (AWSA) Woman Suffrage Associations in 1889 into the National American Woman Suffrage Association (NAWSA), the movement changed direction. The NWSA heralded a broad array of women's issues, from “equal pay for equal work” (a common phrase by the 1850s) to a woman’s right to be, in Elizabeth Cady Stanton’s words, “the absolute sovereign of herself.” While more conservative, the AWSA nonetheless concerned itself with issues like the conditions of working women. The merger changed everything.

The vote increasingly became the single issue of the movement, and with it, an often covert, sometimes overt racist pandering to gain the support of Southern states, and a blatant xenophobia appealing to anti-immigrant sentiment. State suffrage organizations were allowed to segregate and work for the vote for white women only. Give native-born women the right to vote, the argument went, because white women outnumber all African-Americans and immigrants, and woman suffrage is a way to maintain white, native-born supremacy. Superficially, suffragists appeared to be friendly to black women, but the movement utilized racism and xenophobia as a strategy. W.E.B. &nbsp;Du Bois, a prominent civil right activist and supporter of women’s rights, argued strongly that such tactics were self-defeating. He believed that civil rights could not be truly gained by any group by denying the rights of others. 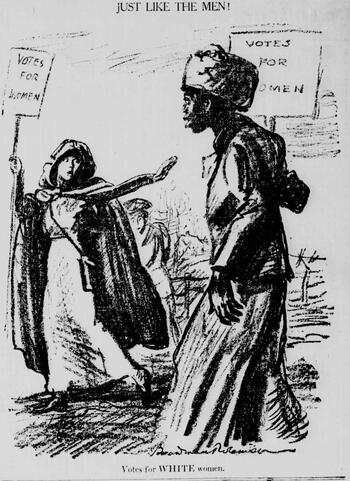 Political cartoon "Just like the men!" from the New-York tribune, March 1, 1913, p. 9. Cartoon depicts a black suffragist being turned away by a white suffragist, with the caption "Votes for WHITE women." Courtesy of South Central Regional Library Council. 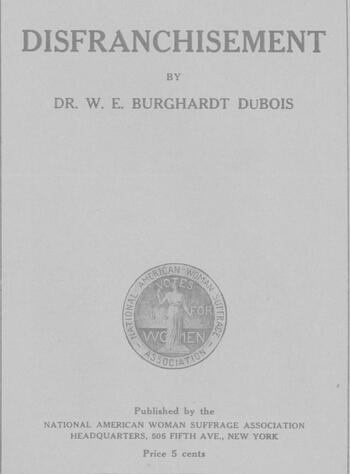 Disfranchisement, by W.E.B. DuBois, 1915. In this essay, DuBois asserted that the argument to give women or African Americans the right to vote based on the “superior right” to have their interests represented over other group was “false and dangerous” and it “represents a climbing of one class on the misery of the other.” See excerpt below. Courtesy of Wells College. 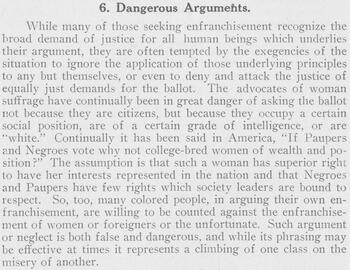 Excerpt from "Disenfranchisement," (above) p. 10:   6. Dangerous Arguments. While many of those seeking enfranchisement recognize the broad demand of justice for all human beings which underlies their argument, they are often tempted by the exegencies of the situation to ignore the application of those underlying principles to any but themselves, or even to deny and attack the justice of equally just demands for the ballot. The advocates of woman suffrage have continually been in great danger of asking the ballot not because they are citizens, but because they occupy a certain social position, are of a certain grade of intelligence, or are “white.” Continually it has been said in America, “If Paupers and Negroes vote why not college-bred women of wealth and po­sition?” The assumption is that such a woman has superior right to have her interests represented in the nation and that Negroes and Paupers have few rights which society leaders are bound to respect. So, too, many colored people, in arguing their own en­franchisement, are willing to be counted against the enfranchise­ment of women or foreigners or the unfortunate. Such argument or neglect is both false and dangerous, and while its phrasing may be effective at times it represents a climbing of one class on the misery of another. 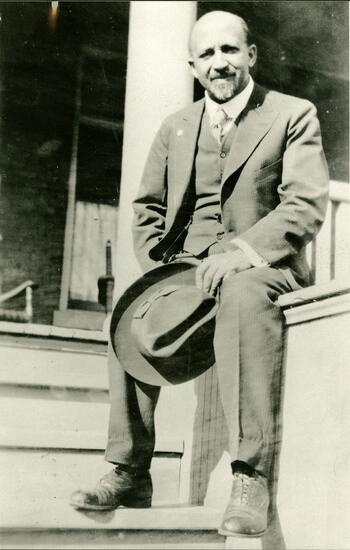 W.E.B. DuBois, circa 1880. DuBois was a strong advocate for women’s rights and wrote many essays supporting women’s suffrage for The Crisis, the official magazine of the NAACP. Courtesy of the Robert W. Woodruff Library.