Even before the end of the first full navigation season on the Erie Canal, it was obvious there was a need for enlargement. The wait for locks often took hours and the sizes of boats that the Canal could accommodate were severely limited. The first enlargement began in 1836, rerouting parts of the Canal and widening it to seventy feet while deepening it to seven feet. Locks were doubled to allow simultaneous two-way passage and extended in length to enable passage for larger boats. Canal construction abruptly halted in 1842 because of public reaction to a tax for public projects. However, work resumed in 1847 and, by 1862, the Enlarged Erie Canal was completed.

The Barge Canal System, begun in 1907 and completed in 1918, was a result of a report from the Committee on Canals, created by New York Governor Theodore Roosevelt in 1898. The Canal’s width was extended to 125 feet with a minimum depth of twelve feet. The towpath was eliminated because it had become obsolete with the rise of motorized vessels. This time, engineers believed they could tame natural bodies of water, relocating the Canal into lakes and rivers controlled by a sophisticated network of dams and locks and virtually abandoning large sections of the original Canal. 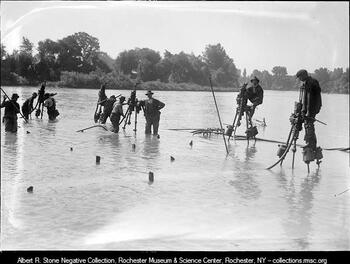 This photograph shows workers deepening the Genesee River near Rochester for the Barge Canal in 1917. By the early twentieth century, the original Erie Canal, which went through the center of Rochester, proved to be too narrow and too shallow for commercial service. It was closed, "dewatered", and transformed into a subway. Commercial traffic was diverted south around the city on the Barge Canal to cross the Genesee River. As cities like Rochester grew in size, that growth made expansion of the original route difficult, forcing canal builders to seek more accessible areas for the enlargement. Courtesy of Rochester Museum and Science Center via Rochester Regional Library Council and Empire State Digital Network. 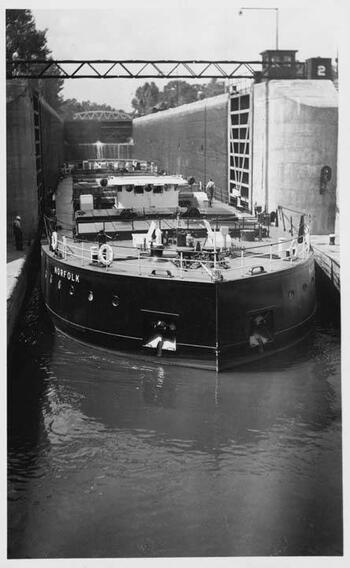 This photograph shows a large barge in Erie Canal Lock 2 located in Waterford, New York, circa 1940. Lock 2 is located at the junction of the Hudson River and the Erie Canal. Barge canal boats were now not only motorized but much larger and so canal engineers decided to "canalize" the bodies of water that the original Canal had been built to avoid since they could more easily accommodate the larger vessels. Courtesy of Albany Institute of History & Art via Capital District Library Council and Empire State Digital Network.

Commerce on the Canal