Frederick Walster was born in 1842 in Bavaria and at the age of sixteen immigrated to New York in 1859 with his mother, Catherine, and siblings, Christian, Conrad, and Catherine. His father had passed away in 1857. The family lived in Fort Plain, Montgomery County, New York.

In August, 1862 Fred Walster and his brother Christian (who died of typhoid pneumonia, in October, 1862) enlisted in the Town of Minden, Montgomery County, New York, as members of Company E, 153rd Regiment New York Volunteer Infantry. Fred was twenty-one years old and enlisted for three years. After the war he returned to his home in Fort Plain. On July 13, 1870, he passed away.

The Fred Walster diary is one of seventeen individual collections of materials from the Binghamton University Libraries Civil War Collections. The diary, beginning on January 1, 1865, describes Walster’s experiences during active duty in the war, and continues through his hospitalization in April, 1865 and to his discharge in June of that year. The diary then continues with his civilian life, with the last entry written on December 31, 1865. The back of the diary contains accounts of his experiences between enlisting in 1862 and 1864, including being sent to Alexandria, VA, Washington, D.C., and New Orleans, LA, before returning to Fort Plains, NY. Many of the entries recount weather conditions, spending patterns, rations, attending church, and the letters he had sent or received. Walster also details his time in the hospital as he is sick and then recovering, and his time as a business clerk. Notably, the diary includes his learning about the assassination of President Abraham Lincoln and shares his reaction to that event. Walster's purchases for each month are recorded at the end of the diary. This diary is transcribed true to text, meaning all grammatical errors and misspellings replicate Walster’s original writing. 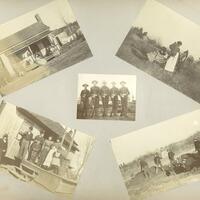 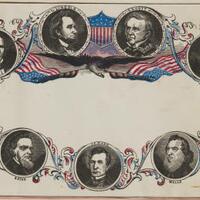