Camp Mills was a World War I military installation located in Mineola, New York. Named after Major General Albert L. Mills, it is recognized as the birthplace of the elite 42nd Infantry of the National Guard, better known as the “Rainbow Division.” Initially established as a temporary camp in September 1917, it soon became the largest training center for American expedition forces and an active port of embarkation for troops in transit to France. Camp Mills was utilized as such until Armistice Day, November 11, 1918, when it was converted to a port of debarkation where garrison troops were stationed upon returning from Europe. Post-war operations continued until March 31, 1920, and in 1938 it was incorporated into Mitchel Air Force Base, which was later decommissioned in 1961. (Note: The land that Camp Mills was built on is now part of the village of Garden City.)

The collection is comprised of sixty-one 2 5/8” x 4 3/8” and six 3 1/8” x 5 1/2” black-and-white photographs taken by an unknown WWI soldier in the Quartermaster Corps. The photos were taken between January and April of 1919, when Camp Mills was used as a post-war port of debarkation. They depict daily life at the camp, and contain annotations on the versos. 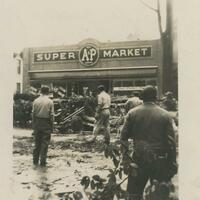