Edward C. Cammann and Richard P. Kent established the Merrick Library in 1891. Cammann, born in 1874, and Kent, born in 1873 and a member of the Columbia class of 1895, were in their late teens at the time. The newspaper Merrick Life said that Cammann and Kent "also planted Dutch elm trees along Merrick Avenue to create a cathedral effect, sadly no more. Mr. Kent loved linden trees and planted many in Lindenmere, helping give it that peaceful air." Cammann's Pond in Merrick named for Edward's family.

According to volume 2 of A History of Long Island, from its Earliest Settlement to the Present Time, "The villagers [of Merrick] feel a just pride in the Merrick Free Circulating Library. This had its beginnings through the instrumentality of the proprietors of "The Messenger," a parish [the Episcopal Church of the Redeemer] journal, and at first consisted of about fifty volumes kept in the hay loft of a vacant stable."

Another source says: "The Merrick Library began humbly enough, in 1891, in the hayloft of a stable on the Cammann family farm, where Edward C. Cammann and good friend Richard P. Kent had put together a collection of 50 books given to them by family and friends. A few months later, the library was moved to a shack on the William Hewlett farm on Merrick Avenue, between Merrick Road and Kirkwood Avenue. A third move brought the Library to a 15-foot room on the ground floor of the newly-built tower of the Merrick Water Company on Kirkwood Avenue, behind the Church of the Redeemer."

The library's fourth home at 2369 Merrick Avenue, was constructed in 1897 at a cost of $1,150 on land donated by Edward C Cammann's aunt, Katherine L. Cammann. That same year, Miss Lina Miller became Merrick's librarian. In 1900, Merrick Library published "An Historical Sketch of Merrick, Long Island, 1643-1900." Written for the Merrick library by Charles N. Kent, father of Richard P. Kent. The text of this book is available online.

Merrick Library is a member of the Long Island Library Resources Council. 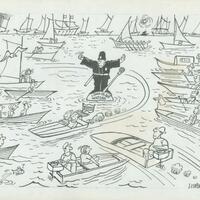 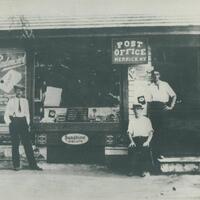 Historic photographs from the Merrick Library. 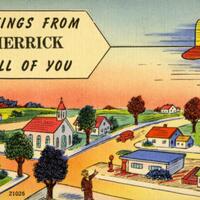 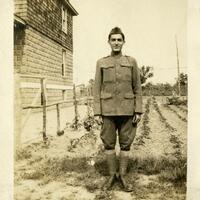 This collection is composed of documents and images of Merrick residents who served their country in various wars. The collection will expand as identities become known and further research has been performed.