The Jacob Leisler Institute for the Study of Early New York History is a unique research and study center focusing on the dynamic but under-examined English colonial period in New York and New Jersey. The Institute is named for Jacob Leisler (1640-1691), a prominent New York City merchant, who in the wake of England’s 1688 Glorious Revolution emerged as the leader of a rebellion in New York against King James II’s government. Leisler’s tumultuous 1689−1691 New York administration shaped the region’s political, economic, and cultural life up to the outbreak of hostilities with Great Britain in the 1760s. 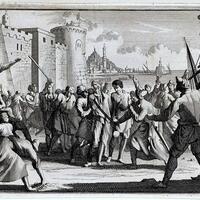 Turkish Captivity of Jacob Leisler and the Susannah

This collection documents the 1677 Barbary Corsairs capture of Jacob Leisler and his crew in the English Channel, their captivity in Algiers, their subsequent redemption, and Leisler's efforts to recoup his losses.