The Oxford Memorial Library is the former home one of America’s premier bridge engineers and designers, Theodore Burr, and the last known existing structure to be built by him. It was the most logical location for a covered bridge resource center, therefore the Oxford Library included it in their Capital Campaign expansion and improvement project that began in 2005. Completed during the summer of 2011, the Theodore Burr Covered Bridge Resource Center’s (TBCBRC) design was kept period appropriate with the Federal-style home in which Burr lived from 1811 – 1813. The Center is a modest room with two oak desks and a Federal blue upholstered chair and rug, with many oak bookshelves displaying covered bridge models and truss examples (such as Queenpost, Kingpost, Howe, Town, and Burr trusses). It also houses an extensive postcard, photograph, and slide collection dating back to the early 1950′s, much of which was donated as a gift of Sherburne residents Bob and Trish Kane. Thanks to a most generous donation by Terry and Sara Miller from Kent, Ohio, the Center now has several modern amenities, including computers and scanners, for the convenience of the patrons visiting the Center.

Oxford Memorial Library is a member of the South Central Regional Library Council. 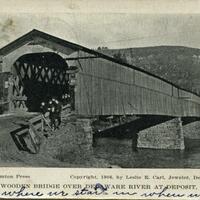